Loving Andrew: A Fifty-Two-Year Story of Down Syndrome 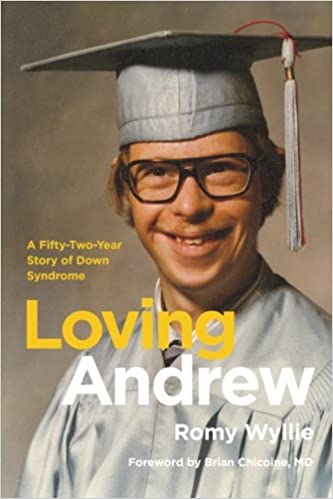 A mother recounts how the birth of Andrew with Down syndrome, and the loss to cancer of a second baby start a family's journey through the maze of parenthood. With the support of a loving father, mother, and two younger siblings, Andrew mastered the skills of life and became a contributing member of society. In spite of coping with schizophrenia in his later years, Andrew remained active, happy, and full of love until Alzheimer's stole his memory and brought his life to a close at the age of fifty-two.

In spite of being told that their firstborn son would have many limitations in life, his parents were amazed at what Andrew achieved. He learned to read and write, ride a bicycle – sometimes too far from home – play the piano, swim, ride horseback and perform dressage, graduate in special education from high school, take classes at a community college, travel alone on Chicago’s public transportation system, hold a job in a regular supermarket for 25 years, win ribbons and medals in Special Olympics events, and serve as the lead acolyte in his church. Andrew’s ability to describe the demons of his paranoid schizophrenia that plagued his later years provides a picture of a little-known ailment among the Down syndrome population.

This book is aimed at a broad audience in order to help all people understand the humanity and value of a person with a disability. This is especially important as medical technology continues to improve prenatal testing for abnormalities, and parents are faced with the heart-wrenching decision to terminate a pregnancy or risk having a less-than-perfect baby. The number of children born with Down syndrome is being drastically reduced, just as opportunities for them to be accepted into the mainstream of life have never been better, and their development has improved exponentially. Life is a game of chance and we should not expect to play God. No embryo selection or prenatal test can guarantee a flawless product or rule out unexpected calamities such as the death to cancer of our second baby.

Interwoven in the story of Andrew are: half a century of changing attitudes toward the developmentally disabled; improved educational opportunities; and discussions on pre-natal testing and abortion. Examples from two other children with Down syndrome, born 21 and 35 years after Andrew, help to illustrate the services that became available after passage of the law “Education for All Handicapped Children” in 1975, and underline the challenges that we faced without such services.

Excerpt from the Foreword by Brian Chicoine, MD: “As the medical director of the Adult Down Syndrome Center… I always appreciate any occasion to get a more in-depth look into the lives of those individuals and their families. This book is one such opportunity… It is about the hope of that journey, and is told through the life of an amazing, delightful, loving, fun, and caring man. Each person has a story. Andrew certainly had his. . . Perhaps you, too, will experience the journey, the hope, and the casting aside of preconceived notions.”

Andrew was special in so many ways; not necessarily different, just special. He had Down syndrome, once known as mongolism. His life story is told by his loving mother who refused to “put him away,” as was common practice at that time, and insisted upon making him socially acceptable and included into the mainstream of family, friends, school, and the workplace. Despite the many hardships and deprivations she suffered, she adored Andrew and was always up to the task of thinking up new, innovative ways to have Andrew live as normal a life as possible, given the constraints of his affliction. Andrew not only lived up to his potential, but often exceeded it.

By necessity, Andrew’s mother and father gave him more attention than they gave his sister and brother. Yet, there seemed to be little, if any, resentment because of this.

Although in some ways school and jobs were struggles for Andrew because he was slow to learn new tasks, he managed to surprise everyone by his capabilities along many dimensions. Andrew’s family worked miracles, and they were rewarded many times over in the form of small victories.

This tender story will break your heart. Andrew will make you smile, laugh, cry, cheer him on, and teach you things you never knew before about the mentally disabled. Just as so-called “normal individuals” have different personalities and capabilities, so do those with Down syndrome.

After reading this book, you will never look at a Down syndrome person the same way you may have in the past.

Romy Wylie has written an intelligent, informative and deeply felt book—filled with personal insight, which details what it was like to raise a child, born in 1959, with Down’s Syndrome.

Despite all urgings and counseling, not unusual at that time, the Wylies chose to accept their “mongoloid” son, rather than institutionalize him. Their path was a difficult one and I was rooting for Andrew on every page, overjoyed to see him find independence, and even love, despite all the challenges he and his family faced. I shared the highs and lows, the frustrations and joys of his development.

Up to the mid-1900s the mentally challenged were institutionalized in state or private schools. Wylie includes fascinating research and historical information, including mention of Rosemary Kennedy, raised in a different time, lobotomized and hidden away—the Kennedy family’s secret. In 1962 Eunice Kennedy began to work to end negative attitudes and openly acknowledged the story of her sister Rosemary, and helped found the Special Olympics.

I particularly appreciated seeing Andy’s drawings included in the book, an indication of his development, and following his accomplishments in school; reading, writing, swimming, playing the piano, riding his bike—if sometimes beyond the range of acceptance—and I shared his family’s pride when he graduated, found a loving relationship and fought for the chance to live independently.

This book will be helpful to families raising children with disabilities, to understand the progress that has been made, and allow them to see what issues may arise. Attitudes have changed dramatically and there are opportunities for education, personal development, work and independent living that didn’t exist at the time Andrew was born. Wylie includes fascinating comparative studies of other children born after Andrew, which allow the reader to see the progress that has been made.

Loving Andrew is a joyful book—a story that needed to be told. Andrew was certainly loved.