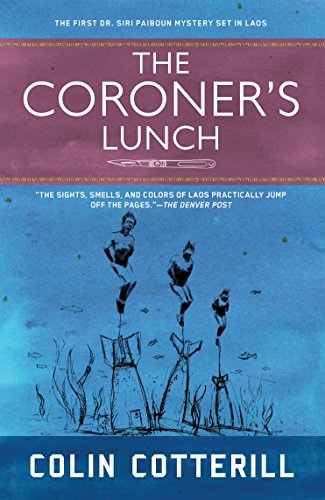 Laos, 1978: Dr. Siri Paiboun, a 72-year-old medical doctor, has unwillingly been appointed the national coroner of the new socialist Laos. His lab is underfunded, his boss is incompetent, and his support staff is quirky, to say the least. But Siri’s sense of humor gets him through his often frustrating days. When the body of the wife of a prominent politician comes through his morgue, Siri has reason to suspect the woman has been murdered. To get to the truth, Siri and his team face government secrets, spying neighbors, victim hauntings, Hmong shamans, botched romances, and other deadly dangers. Somehow, Siri must figure out a way to balance the will of the party and the will of the dead.

I enjoyed this book very much. I knew I would probably like this series but I liked it even better than I thought I would.

Dr. Siri Palbourn is 72 years old and was ready for retirement. He is living in Laos and it is 1976. He studied medicine in France when he was a young man. He fell in love with a young revolutionary and followed her back to fight for the cause. Now he is 72 and and Laos has a new communist government. The doctor who had experience in doing autopsies swam across the river to Thailand so now Siri is made the National Coroner of Laos. The problem is that he has not trained in this area.

The department is underfunded and has few supplies. He has a boss who doesn't understand his own job. Suri does his first autopsy by following a 30 year old French book. The characters are special in the book. Dr. Siri is humorous and speaks his mind in an atmosphere that does not encourage this at all. He has two not typical assistants who he likes very much. One is a nurse Drui who wants to train for his job. She likes to read entertainment magazines. Mr. Geung has Downs Syndrome and has become skilled in autopsy skills. He and Dr. Siri greet each other every day "Do we have any customers today. No customers today, Dr. Comrade."

The first page of the book is quite dramatic. It starts the mystery of three men who are dropped from a helicopter into a lake with weights attached to their legs. Two countries, Vietnam and Laos become involved with investigation of the murders. Dr. Suri investigates.

Also, a prominent wife of a leader dies at a banquet and her husband is very eager to take the body away from Dr. Suri. Dr. Suri finds he has investigative skills and doesn't take the word of those above him for what has caused the deaths. Dr. Suri also has communications with his "customers". At first they come to him in dreams but later it occurs in his waking life.

I laughed out loud several times. It is a gentle book yet it is not. Dr. Suri makes it seem that way. I have the next book to read. It is a special series. I think if you like mysteries in foreign countries with great characters, very good plotting and humor, you should like this book.

Gloriously funny detective series, the detective in this case, Dr Siri Paiboun, the Chief Coroner (only coroner!) of communist Laos in the seventies. He is an unwilling coroner, forced into the post at the age of 70 or so, when most of us would have been retired for some years. He is totally unqualified to do autopsies and he has little in the way of equipment to test out any theories that spring to his unorthodox mind. In his endeavours he is helped by a nurse and a Down's Syndrome morgue assistant who worked worked for his predecessor.

He is also helped by what he first thinks are just dreams, but eventually he reluctantly accepts that they are a spiritual force. This aspect develops as the mystery unfolds.

He is hounded by bureaucracy and corrupt officialdom but, naturally, overcomes all obstacles in his path with his original way of approaching his cases.

The book certainly reinforces my opinion that I would hate to live under a real communist regime, but one certainly gets an interesting slant on political history of that region. The brilliantly conceived setting enables Colin Cotterill free reign to his gentle and very perceptive wit.