I Shot the Buddha (A Dr. Siri Paiboun Mystery Book 11) 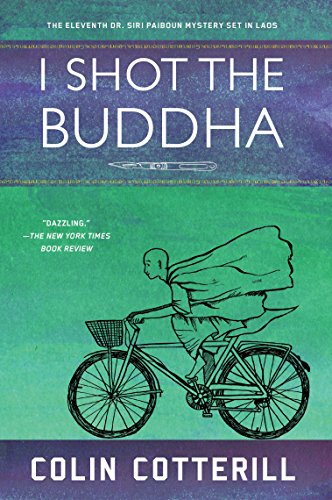 Laos, 1979: Retired coroner Siri Paiboun and his wife, Madame Daeng, have never been able to turn away a misfit. As a result, they share their small Vientiane house with an assortment of homeless people, mendicants, and oddballs. One of these oddballs is Noo, a Buddhist monk, who rides out on his bicycle one day and never comes back, leaving only a cryptic note in the refrigerator: a plea to help a fellow monk escape across the Mekhong River to Thailand.

Naturally, Siri can’t turn down the adventure, and soon he and his friends find themselves running afoul of Lao secret service officers and famous spiritualists. Buddhism is a powerful influence on both morals and politics in Southeast Asia. In order to exonerate an innocent man, they will have to figure out who is cloaking terrible misdeeds in religiosity.

I am always happy to see a new book in this series. I have them all and have given copies to friends and family. Cotterill does a great job of portraying Laos shortly after the 1975 communist takeover and provides plenty of background on the decades leading to the fall of the "dominoes." His dialog and character development is totally believable and likely provides an accurate picture of life in the lackluster socialist paradise. He injects plenty of humor into his stories, which is probably a necessity for survival in Laos. What really surprises me is that I have a low tolerance for spiritualism or the occult in anything I read, but somehow Cotterill makes it work as an integral part of his storylines. His novels are absorbing, funny, and enlightening. Nothing will ever make me nostalgic for my time in Vietnam during the war. But Cotterill's books provide a perspective from both the communist and anti communist Laotians, points out the follies of leaders on both sides, and shows us what happened after Southeast Asia fell and communism took over the entire world. Oh yeah, that last thing didn't actually happen.

Once again, 75 year-old Dr. Siri Paiboun, retired, gets himself nearly killed, as do most of his friends. This is Laos 1979, and it is a precarious place to be inquisitive and anti-authoritarian, both attributes of which Siri has in abundance.

It all starts when Noo, an itinerant Thai monk, is kidnapped off his bicycle by some tough army-types. It just so happens that Noo left Siri an "in case something happens to me" letter, and Siri has to follow up. On another story thread, Siri's good friend Civilai is selected for an official visit to neighboring Thailand where a surly mechanic is supposed to be the next Buddha. Eventually, these two stories will connect, and, yes, there are several murders to solve, too.

I enjoyed "I Shot the Buddha" and have read every other book in Dr. Siri series. I think that perhaps it would be more of a mishmash if the reader was not already familiar with the characters. To quote Colin Cotterill's short introduction: "A mental health warning: Through necessity this edition is heavily spiced with supernatural elements. For those of you who prefer your mysteries dull and earthly, this is not the tome for you. Don't say I didn't warn you." If you DO prefer your mysteries more "earthly", I can highly recommend the first four books in the series, starting with The Coroner's Lunch (A Dr. Siri Paiboun Mystery) .

I love Cotterill's writing style and quirky characters: "There was little else to do in Vientiane, even on a Saturday. The city was shuttered and dusty, and the only sounds at night were the burping of frogs and the occasional crashing of hopes." There is a lot of humor and witty dialogue, and the politics and culture of 1979 Laos are like characters in the story: "Even in such a claustrophobic bureaucracy it was unlikely a second-grade clerk would pursue revenge for regulation infringement from the grave." There is also, in this story, cogitation on the meaning of religion.