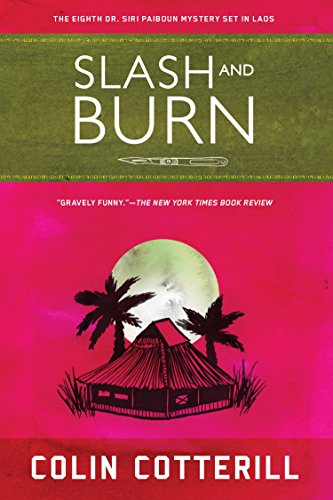 Dr. Siri never really wanted to be Laos’s national coroner. And now that he is in his mid-70s, he longs to spend some time with his wife before the untimely death that is sure to befall him, according to the local transvestite fortune-teller. But retirement will have to wait (again) until he has completed one last job for the Lao government: supervising an excavation for the remains of a US fighter pilot who went down in the remote northern Lao jungle ten years earlier. And the stakes are high. The presence of American soldiers in Laos is controversial, and the search party includes high-level politicians and scientists. So when a member of the party is found dead, Dr. Siri suspects it may not have been an accident. Can Dr. Siri get to the bottom of the MIA pilot’s mysterious story before the body count rises and the fortune-teller’s prediction comes true?

I had read of the burning of fields in Laos, particularly the northern hills, and how the smoke created such a miasma that certain months one should avoid because of the pall. Cotterill's artistry in this novel was to combine this atmosphere with the bombing not too many years earlier by Americans of these hills, the dropping of napalm and other ordinance which still creates a deadly milieu for innocent Laotians, and the greed of Americans to profit from wartime confusion and corruption at the expense of the locals. Though some good shines through from a few Americans involved and the author always finds the humorous side of whatever dilemma Siri confronts, the contrasts in values, priorities, and approaches dominates the book, challenging Siri, Daeng and Civilai, along with Dtui and Geung and Phosy to work hard to bring the tale to a successful conclusion with minimal human casualties, though the environment has been contaminated in some areas with small chance of resolution.

I love this series for its colorful, and sometime eccentric characters, cultural interest, and historical facts, not to mention the wry tongue-in-cheek humor. The wonderfully descriptive language sets my imagination going also. Here is a sample of my favorite phrases: "long canine yawn," "blurry cheeseball of a sun," "pocket of gloom closing in on them," and "sudden giggly sound of water tickling the rocks."