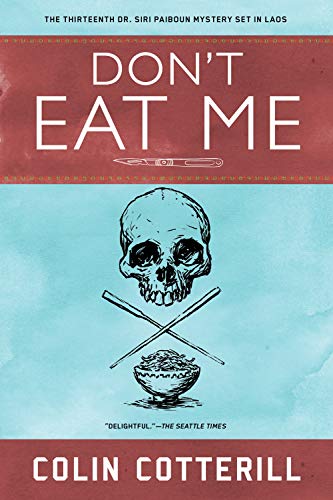 Between getting into a tangle with a corrupt local judge, and discovering a disturbing black-market business, Dr. Siri and Inspector Phosy have their hands full in the thirteenth installment of Colin Cotterill's quirky, critically acclaimed series.

Dr. Siri Paiboun, the 75-year-old ex-national coroner of Laos, may have more experience dissecting bodies than making art, but now that he’s managed to smuggle a fancy movie camera into the country, he devises a plan to shoot a Lao adaptation of War and Peace with his friend Civilai. The only problem? The Ministry of Culture must approve the script before they can get rolling. That, and they can’t figure out how to turn on the camera.

Meanwhile, the skeleton of a woman has appeared under the Anusawari Arch in the middle of the night. Siri puts his directorial debut on hold and assists his friend Phosy, the newly promoted Senior Police Inspector, with the ensuing investigation. Though the death of the unknown woman seems to be recent, the flesh on her corpse has been picked off in places as if something—or someone—has been gnawing on the bones. The plot Siri and his friends uncover involves much more than a single set of skeletal remains.

I’ve read all the Dr. Siri mysteries and love the characters. Colin Cotterill’s ability to combine the characters’ quirkiness and humor with a very serious message is admirable. In this novel, he addresses trafficking in exotic animals and makes his point effectively. However, I found the actual plot of this novel to be hard to follow. Without giving anything away, there are eventually at least three versions of the events leading up to and following the crime that the reader must follow and compare. The proof of one over the other is largely based on argument and changing witness statements. I didn’t find the outcome convincing.

If you have read and loved the other Dr. Siri mysteries, you won’t want to miss this one. If you like the Inspector Phosy character, he plays a prominent role; and other characters continue to be developed. You might miss Siri because he is not center stage in this one. Not my favorite by far, but I’d recommend it.

Dr Siri and his Laos "Scooby gang" are back at work helping to solve the death of a young woman trapped in a crate who looks to have been eaten. A ghastly murder to begin this mystery.

I have become very fond of this series. The characters are wonderful and while there are crimes, there is also some humor to be found. I do not want to add too much to the storyline as Colin Cotterill uses this book to make a strong conservation statement that is very significant.