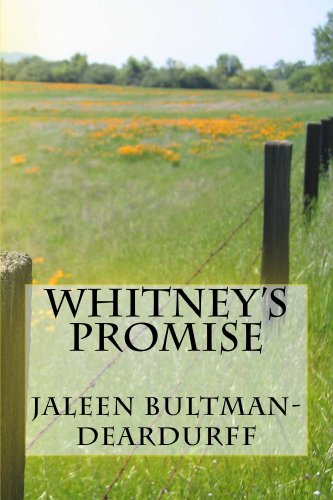 Whitney Roberts struggles to balance life between her biological father, from whom she had been taken years earlier, and her adopted parents who have always loved her. She wants to spend time with her father, Philip Roberts, who lives two thousand miles away, but she loves her life and family in Indiana. Her dilemma intensifies when she learns a terrible secret that could have changed her fate and prevented the heartache her parents suffered when she was kidnapped at the age of two. When she meets Jared Bear and his nine-year-old daughter, Katie, who has Down’s Syndrome, Whitney looks deep into her heart and puts things into perspective, but will she be able to uphold a promise she’d made years ago?

I absolutely loved this book. The characters were believable, and the love shown for a child with Down Syndrome is portrayed in a very real way. Teachers and parents of children will enjoy this story as will those who love horses. The book was obviously well researched as well. It is very well done.

This is the sequel to " Letters to Whitney" about a young girl who had a rough beginning in life along with a "brother" and throughout her first years trying to make sense of where she came from and where she belongs. "Whitney 2" is the story of where her life has taken her and the importance of family. It was a book that couldn't put down. It didn't take me long to read it.