↓ Skip to Main Content
Home › Book › Wherever Lily Goes: A Novel: The Second in a Trilogy (The Lily Series)

Wherever Lily Goes: A Novel: The Second in a Trilogy (The Lily Series) 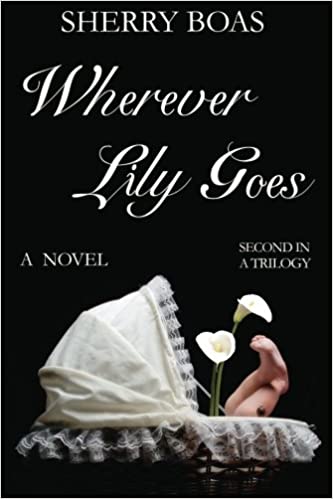 Terry Lovely isn't expecting any great rewards for her decision to uproot her family, move halfway across the country and take care of her sister Lily, who has Down Syndrome. What Terry will eventually discover, however, is that Lily will give more than she will ever take, including a certain something Terry doesn't even know is missing.

A thoroughly natural, and so thoroughly believable, look at life, aspirations and family ... Perceptiveness and wit are present on every page ... you will be entranced, you will experience the joys and sorrows of the characters, you will cry, and you will not be able to put Lily down. -- Dr. Jeff Mirus, CatholicCulture.org

Novels can be dangerous; if they are compelling, they threaten to suck up all of a busy mother's time away from her children. For half a week, I have been capitalizing on the distraction of my family or stealing needed sleep from myself, in order to plunge headlong into the world of Lily in Sherry Boas' books, The Lily Trilogy. Some novels tempt you to want to live in a fantasy world, to keep the characters you have come to know and love alive. The characters in the Lily Trilogy are as real as your own family, and as flawed. Yet, there is a theme in these novels, a theme of redemption which starts faintly at first, as a thirty-something Lily walks her frail aunt down the nursing home corridors to patiently feed her meatloaf and mashed potatoes even though she has long ago lost her sense of taste, Lily gives the love Bev meted out to her in tiny pinches, in unmeasured generosity Bev knows she doesn't deserve. But Lily's prodigious love changes Bev, and heals her. Not by taking away from the suffering of losing control of her limbs to the Parkinson's, but helping her to see beyond this life, to an eternal love mirrored in the gentle touch of the soft hands of a young woman whom the world rejects. The power of selfishness to destroy lives versus the power of self-giving love to restore hope is the theme of this amazing story set in the future. Strange as it was to see dates like 2066 written as dates in the past of the novel's characters, this is no science fiction book. It is a story about real people who resemble people around us, whose flaws hurt and whose love heals us, and the hope that turns despair into love though the power of pure intentions. I hugged my nine year old daughter with Down syndrome each time I reluctantly put the books down, and saw heretofore unappreciated qualities in my family. The Lily Trilogy filled my heart with gratitude for my family, and made me determined to be the catalyst of God's healing in my family. These are the novels I want my daughters losing themselves in this summer. I want to sit outside with cups of tea in the summer twilight and talk about Lily, Beth, Pablo and Terry. Then, I want to pick up the books and visit them again. These books, after drawing me into their world, make me reflect on my own with appreciation and want to become the transformed Terry who sees the nobility in her husband she missed in 20 years as he moved across the country to care for her sister Lily. To make my home radiate with the joy of their renewed love. To take my precious nine year old daughter Christina in my arms and thank her for the joy she has brought to us, and not to fear what her adulthood will bring. Whether or not she lives independently, she, like Lily will be a blessing to whoever shares her life. How many times can it be said that a novel makes you a more grateful, loving person who reenters life from the world of the novel to embrace the challenges which sent you running into the pages of the book in the first place? Recommended for ages 14 and up, no objective content. --Leticia Velasquez, Catholic Media Review

Perhaps because of her own experience mothering a Down Syndrome child, Sherry Boas manages to be realistic in an understated, vivid way about the small but piercing aggravations as well as the small, ordinary graces. -- Willa Fortuine Ryan, The Quotidian Reader

The continuing story of Lily, a person with Down syndrome, and those around her gives such a positive outlook on life in general despite our problems. She loves with such abandon, oomph as she gives a bear hug. It's a little confusing if the first book wasn't read. It has to do with Bev who, tho perfectly happy being childless, is given the care of her dying sisters' 3 children Lily being the youngest so the aunt is sometimes called mom. She is already fairly independent and lives in a group home but needs family around her so her sister & family move to be near her, after Bev dies, so that begins this book. The author goes back and forth in time as the sister remembers growing up with Lily and so you have aunt Bev and mom, as did the first book. Also there's Lily's dad whom she never knew, except for a vague memory, but was never a part of her life until he is found. He loves her dearly and she him. If I remember correctly, she was conceived thru an affair so he wasn't welcome in the mom's life and the older 2 are adopted but I'm not sure why or how. I love the books tho....even if my memory is fuzzy about the first.

I loved the first book in this trilogy, Until Lily (see my review) so I grabbed this one when The Catholic Company offered it for review. While I enjoyed it, I found it more preachy and less well written than Until Lily.

Terry's family consists of her and her husband, along with their three girls, the youngest of whom is about ten. The oldest is a troubled teen. When Lily needs a caretaker, Terry and her husband decide to uproot the family and move across the country to be with Lily, rather than disrupting Lily's life and bringing her to them. They quickly become friends with Lily's favorite priest who becomes Terry's spiritual mentor. Though Terry has not been much of a churchgoer, she joins a mom's group in Fr. Fitz's parish and studies Pope John Paul II's On the Dignity and Vocation of Women which is quoted in many places throughout the book.

This whole trilogy is set in the future,which is a little confusing and hard to remember at times. There are just a couple of references to the past, which remind the reader that the story is set about 30 years in the future. In this book Terry remembers the Swine Flu year and how everyone was always carrying hand sanitizer. In another scene a mom tells Terry that due to socialized medicine the bureaucrats, not the parents, got to decide if premature babies were treated or only given "comfort care".

Conversations with Fr. Fitz deal with forgiveness of others and forgiveness of self. He urges prayer as the first step in helping a troubled child. Still,for all the conversations with Fr.Fitz, Terry herself never comes across as terribly religious; in fact she readily admits that she doesn't pray and doesn't feel anything when she does--which gives Father an opening to talk about the dark night of the soul.

All in all, it was an enjoyable story, a little heavy-handed on the religion but still a good read. Grade: B.