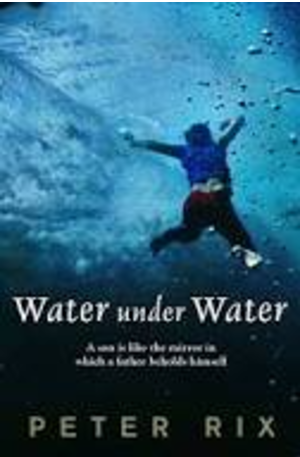 A love story to make you question your own assumptions, emotions and actions.Water Under Water is the story of Jim and Tom Campion, a father and son who share a passion for the water. Jim is a high achiever - Tom has Down Syndrome. The novel is as much about their struggle to love and accept each other as it is a boy's coming of age tale. Tom and his Adventurers Club, all young adults with special needs, go on a white water rafting weekend with two carers. Jim, Tom's dad, at the insistence of his wife Fran, is to drive and join them. Tom is now 19 and Fran has told Jim that she is not sure that she can love Jim anymore as she does not believe that he has allowed himself to love Tom in the same way he loves James, their older son. The rafting trip is a test of love - in every direction. And it tests a lot more. Challenging the stability of a long-term marriage and what can wrench it apart or fritter it away, the constitution of a perfect family, independence and adventure, living with disabilities - this novel is about love.

Water under Water by Peter Rix is a breathtakingly eloquent story about who we are and how we love. Simply written, it allows the reader to enter the world of `disability' and the lived experience of Down syndrome.
It is the story of Jim and Tom Campion, a father and son who share a passion for the water, but little else. Tom's mother Fran wishes Jim could love their Tom in the way he does their other son James. But Jim struggles and it is a weekend of white water rafting that will fully test his capacity to connect with his son and his wife.
The novel explores the importance of taking risks and the ways in which we think about what is and isn't `risky'. Rix delves into the deep need for each of us to make our own decisions, to be allowed to decide moment to moment about our own well-being, happiness and life goals.
Rix has been inspired by his own personal experience to write a novel and not a memoir. In terms of literary merit this is important. It is likely the book will be compared to the hugely successful novel The Memory Keeper's Daughter by Kim Edwards. Yet there are significant differences between the two. Edward's focuses on the life long grief that follows a father's decision to give away his and his wife's baby immediately after she gives birth. The girl who has Down syndrome and has a twin is placed in `care', and the novel centres on how this secret undermines the family's relationships in the ensuing years. Edwards deals with her subject matter competently, but her book reads like the work of an author's imagination. She also sentimentalises Down syndrome and portrays Phoebe as loveable, but always in need of care. Rix on the other hand has written a book informed (as we are told in the author's note) by his own experience of parenting a daughter with Down syndrome, and while it is a work of his imagination it is remarkably authentic and does not sentimalise or infantilise the person with Down syndrome. As a result it is certainly the more believable of the two.
Rix has attempted to articulate the voice of a character that has an intellectual disability, allowing the nineteen-year-old Tom to speak directly to the reader. Textually and culturally this breaks new ground. Rix's imagining the voice of Tom, allowing the voice of Tom and his friends to play a major part in the storytelling both innovative and brave. Rarely attempted it is likely Rix will be seen as having made a significant and important addition to Australian and international literature.
The voice of Tom however is not without its complications. Yes, it does give the reader an insight into Tom's way of thinking, his capacity to conceptualise and express his emotions. However because Tom's speech is so articulate and often similar to that of the characters who do not have a disability, the credibility of the voice as a representation of someone with Down syndrome could be challenged. No doubt however Rix had his reasons - perhaps choosing to create a particularly able and verbally adept character for the purpose of novel because he didn't want to have to portray Tom's speech as being too different and risk making him seem too unlike the so-called `normal' characters, thus possibly undermining what is the book's most compelling theme: that love knows no exclusions.
This review was first published in Voice, September 2011. Down Syndrome Victoria and Down Syndrome NSW Members' Journal.

I was very touched by this read. It's about a father (Jim) and son (Tom) who has down syndrome. The author has a daughter with down syndrome, which gave me confidence the author knew what he was talking about. I absolutely wouldn't as have not had any contact with down syndrome. This book was a beautiful introduction. There is so much warmth. I loved Tom, and felt very much for Jim, who struggled with his relationship with Tom. Other characters were enjoyable as well, Jim's friend whose name escapes me, and his wife Fran who made peace with the disability much more easily than Jim, as well as a cast of Tom's friends who have various disabilities. The first page has a brief description of the author and then states "Water under Water is inspired by his daughter and her friends with intellectual disabilities, their love of life, their humour and their courage". This is evident on every page. Loved it.