The Museum of Forgotten Memories 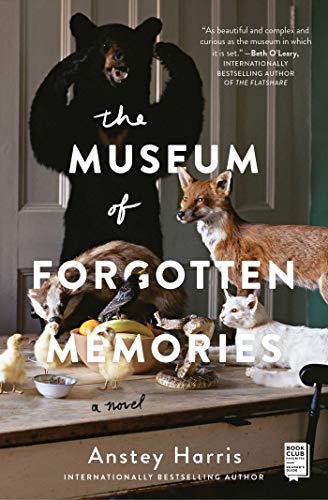 At Hatters Museum of the Wide Wide World, where the animals never age but time takes its toll, one woman must find the courage to overcome the greatest loss of her life—from the author of Goodbye, Paris.

Cate thought she’d met her match in Simon at university—until she laid eyes on his best friend, Richard. Cate and Richard felt an immediate and undeniable spark, but Richard also felt the weight of the world more deeply than most. As the three matured, he receded further and further into darkness until he disappeared altogether.

Now, four years after Richard’s passing, Cate is let go from her teaching job and can’t pay the rent on the London flat she shares with her and Richard’s son, Leo. She packs the two of them up and ventures to Richard’s grandfather’s old Victorian museum in the small town of Crouch-on-Sea, where the dusty staff quarters await her. Despite growing pains and a grouchy caretaker, Cate falls in love with the quirky taxidermy exhibits and sprawling grounds and makes it her mission to revive them. When the museum is faced with closure because of a lack of visitors, Cate stages a grand reopening, but threats from both inside and outside the museum derail her plans and send her spiraling into self-doubt.

As Cate becomes more invested in Hatters, she must finally confront the reality of Richard’s death—and the role she played in it—in order to reimagine her future. Perfect for fans of Evvie Drake Starts Over, The Museum of Forgotten Memories masterfully weaves life with death, past with present, and grief with hope.

I was given an advanced copy of this book from the publisher so I could provide an honest review.

University was the exciting time it was meant to be for Cate, it was there that she met her Richard and his best friend Simon. She had no idea then the path that her life would take.

Cate and Richard were happy for a time, they had a beautiful boy, Leo. He had downs syndrome but we was the most marvelous little boy, he was their entire universe. Then Richard’s illness crept in and turned their happy family, their beautiful little world upside down.

Cate did everything she could, took him to all the specialists they could, but his depression grew worse and be became a shell of the man he once was. Simon came and stayed with them to help ease the burden. They tried to shelter Leo as much as they could from Richard’s sickness. Death seemed to have come in and made itself at home in their little house, it didn’t seem to want to leave until it had taken what it came for. And one day it did, Richard took his life and left them all to pick up the pieces.

Cate was made redundant and Simon had gone off on another expedition again, leaving her all alone to pick up the pieces, try and find another job and find somewhere for them to live before the house was repossessed. She had discovered Richard had taken out loans and owed so much money that he hadn’t paid back, so now they were taken her house. At a loss with what to do, she found a lifelong. Richard’s family had a museum and any living descendant of the family was entitled to live in the rooms above the museum, reluctantly she takes it.

But when Cate arrives at the museum with Leo, she finds it dark and gloomy just like it’s old caretaker Araminta, dark and full of secrets. Secrets that if you look and prod in the right places will expose themselves to the light. Yet Cate and Araminta must find a way to work together so the museum can survive or they will all find themselves desolate and alone.

“The Museum of Forgotten Memories” is a story that makes you appreciate what you have and the ones who are always there for you. Cate’s plight is one that is sad and unfortunately is real for so many people. It also shows if you have the right people around you and if you are willing to take chances and believe in yourself, you can achieve anything. But most importantly how secrets never stay hidden for long, they are better out in the light than hidden away in the darkness.

It also highlighted how someone battling what Richard was can feel so alone and use all their energy just trying to stay in the here and the now. Depression isn’t something that you can just turn off, it is a constant battle trying to see the light and what is worth being here for.

This story is a beautifully written tale that cleverly captures the light and dark of the human persona, how depending on the circumstances one faces in life can alter the path they take, how a push or a gentle nudge can easily have one flicker between the darkness and the light. But if stay true to who we are we will be alright; we will be exactly where we are meant to be.

The death of her beloved husband left Cate Morris riddled with guilt. Even four years later, the sorrow is still evident in her eyes. She’s tried so hard to put on a brave face for the sake of her young son. But after losing her job, she can’t stop their world from shifting.

The only place that they can turn to is the peculiar museum that has been in her late husband’s family for generations. The Hatters Museum of the Wide Wide World is most known for its collection of mounted animals. It’s not the kind of place that Cate ever imagined starting over. But sometimes, you find the greatest strength in the strangest of places.

“And that’s the most bitter thing about love: you can’t understand it, measure it—not all its edges and intricacies—until it’s gone and the clear print of its negative self is left behind.”

The Museum of Forgotten Memories is a lyrical proclamation of strength. Anstey Harris weaves a fragile thread of it through each of her characters. No matter how imperfect they seem on the outside, they remain remarkably resilient in their heart of hearts to the very end.

The story itself is painful one moment and then inspiring in the next. I found myself falling under its unusual spell while cheering out loud for both Cate and Leo. And I somehow know that the world would be a much better place with them in it. Wherever they might be…