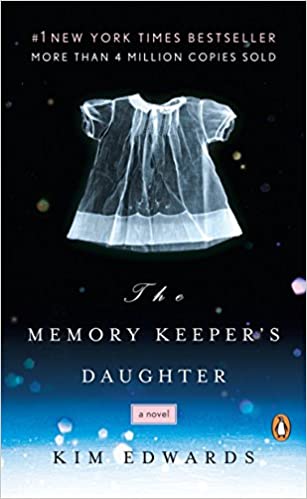 A #1 New York Times bestseller by Kim Edwards, The Memory Keeper’s Daughter is a brilliantly crafted novel of parallel lives, familial secrets, and the redemptive power of love

Kim Edwards’s stunning novel begins on a winter night in 1964 in Lexington, Kentucky, when a blizzard forces Dr. David Henry to deliver his own twins. His son, born first, is perfectly healthy, but the doctor immediately recognizes that his daughter has Down syndrome. Rationalizing it as a need to protect Norah, his wife, he makes a split second decision that will alter all of their lives forever. He asks his nurse, Caroline, to take the baby away to an institution and never to reveal the secret. Instead, she disappears into another city to raise the child herself. So begins this beautifully told story that unfolds over a quarter of a century—in which these two families, ignorant of each other, are yet bound by the fateful decision made that winter night long ago.

A family drama, The Memory Keeper’s Daughter explores every mother's silent fear: What would happen if you lost your child and she grew up without you? It is also an astonishing tale of love and how the mysterious ties that hold a family together help us survive the heartache that occurs when long-buried secrets are finally uncovered.

I appreciated the development of characters and the story line in this novel, based on a true story, very much. However, I did find the flowery prose to be overdone and was glad when the author left most of that behind as she developed her interesting story line of a family ultimately wounded deeply by the birth of a disabled child. I found that I did not share the author's negative portrayal of the father in the family, who it seemed to me was poorly understood and basically unloved by the dependent and immature woman he married. His wife's transformation from dependent woman to little-caring adolescent rebel to worldly sophisticate was interesting, but not a story I could identify with. I did enjoy and relate to the portrayal of the nurse thrust into the role of mother for the disabled child.

This may be the most beautiful book that I have ever read. The writing is superb. The unfolding of the story is so amazing through layers of meaning. I read slowly to capture all of the nuances and I found myself transported to a time that was so different to that in which we now live. I cannot understand the low ratings for this book and I am amazed at how so many reviewers misunderstand the writing and the words used to describe Phoebe. The year was 1964. In 1964 the birth of a child with Down’s Syndrome was considered a tragedy by many. Education programs that would guide development and opportunity for the child did not yet exist. And, yes, the term “retarded” was used. Often a child with Down’s Syndrome was institutionalized for their whole lives and that was recommended by medical personnel. I am not saying that was right; I am saying that is the way it was. The author has beautifully captured the nuances of human emotion on every level imaginable. She has woven a story that takes all of those layers of emotion, including the best and the worst of what humans can do, and has allowed it to be transformed into a beautiful tapestry. I will return to this book and read it over and over. It is just that beautiful.