↓ Skip to Main Content
Home › Book › Taking Tamar: Adopting and Bringing Up a Child with Down Syndrome

Taking Tamar: Adopting and Bringing Up a Child with Down Syndrome 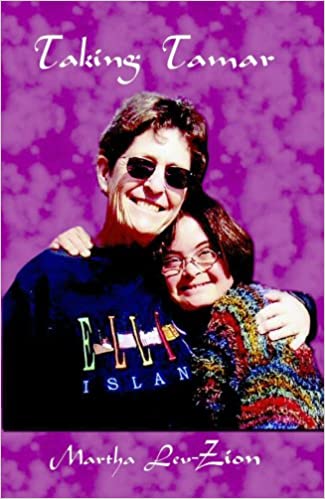 This is a book about a mother's experience bringing up a child with Down syndrome. In 1986, Martha Lev-Zion, a single woman in her 40s, heard about a TV documentary regarding 22 children with severe birth defects who had been abandoned by their birth parents in Israeli hospitals. Martha applied for one of those babies, but was told that of the 65 applications received, hers would be the last one considered. In the end, with only one baby remaining, Martha took into her care a 14-month-old girl with Down syndrome. This book relates the amazing journey of Martha's life raising her daughter Tamar. Interwoven with her experiences fighting Israeli governmental authorities, school systems, the birth family, and even the U.S. government, is her commitment to bring up her daughter as normally as possible, and the incredible accomplishments her daughter was able to achieve. When she was 14 months old, Tamar was tested and found to have an IQ of between 45-60. Today she is a young woman of 21, living independently, with a job as an assistant secretary at a university. She still has some of the characteristics of a person with Down syndrome, but Martha s commitment to maximize Tamar s potential is something she feels any parent should do in rearing ANY child.

This is a wonderful story of how perseverence and love can help "save" the life of a child who otherwise would be consigned to a life in an institution. The warmth and spirit of the author will be an inspiration to everyone but especially those raising a handicapped child. It is an amazing story of how a little girl, abandoned by her family because of being born with down's syndrome,is adopted by a single mother and given a chance for a normal life. That Tamar has grown up to become such an exceptional young woman is a credit to her mother and to her own personality which shines throughout the book. It is truly a worthy "read".

This book is extraordinary. The author, Martha Lev-Zion, a single woman in Israel, adopted an unwanted Down Syndrome baby. Against odds, she refused special education for Tamar, who was mainstreamed for most of her classes. Martha worked continuously as well to teach her every day, such as having Tamar count each stair as they walked upstairs. Now that she is 20 Tamar is a friendly, cheerful young lady who can talk both Hebrew and English fluently, has many friends and holds down a regular job. "No" is not in her vocabulary. I should know, because I met Tamar in May, 2006. This book should be must reading for any one dealing with a Down Syndrome child. It is both realistic, and very encouraging. J. Andrews, M.D./ Concord, MA