↓ Skip to Main Content
Home › Book › Some People Even Take Them Home : A Disabled Dad, a Down Syndrome Son and our Journey to Acceptance

Some People Even Take Them Home : A Disabled Dad, a Down Syndrome Son and our Journey to Acceptance 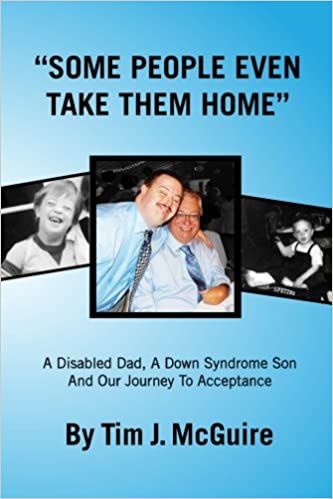 It is a story filled with passion and compassion, with irreverence and humor, with the awareness of struggles and the joy of achievements. It also is a love story: The love of two generations of parents for their children, the love shared by husbands and wives, and the love that binds brothers and sisters. At its center are a father and a son. The father, Tim, was born with shattering physical disabilities, a child whose future was in doubt. But he survived multiple operations, penetrating pains, hurtful taunts, failures and triumphs, and the roller coaster of emotions to reach the heights of his profession, journalism. The son, Jason, was born with Down syndrome. It was the insensitive and crude doctor who announced his birth with the words that became the family’s rallying anthem: “Some people even take them home.” Jason mostly lives and thrives in the world of a five-year-old at age 35, yet at times his insights are those of a wise man. And the sweetness and charm of his personality have touched all who know him. He leaves his mark wherever he goes. There are many other supporting actors in this story, and they all have had a role to play, none more so than Jean, beloved wife and mother, and Tim and Jason’s north star.

Once you've finished Tim McGuire's "Some People Even Take Them Home ..." one point jumps out you with full force: yes, McGuire's book is certainly a look at living with disabilities, but in reality it is a beautifully written tale about "ability." The ability to overcome the most debilitating congenital physical complications. The ability to withstand ridicule. The ability to over-exceed the very low expectations of others. The ability to say to oneself: "I can be whatever I want to be." McGuire's telling doesn't cut corners, whether about how he faced his own considerable physical challenges or took on with his wife Jean the raising of their Down syndrome son, Jason. The author lays out in full the astonishing and personal details in telling the story of what some would have considered an improbable rise to the top of the nation's newspaper editing ranks. But again, ability, and sheer determination, trump improbability over and over throughout McGuire's life, the reader quickly learns. To tell Tim McGuire that he can't do something, is to then watch as he does it. When the last word is read, one is likely to lay down the book (or Kindle reader) and feel inspired, simply, to make more of oneself.

Excellent, beautifully written book - or life story! I played with Tim when we were little living in MI, never wondered why he limped just knew he was lots of fun. My family moved away and I've never seen him again. I laughed and cried and was totally blown away but what he has accomplished, how he and his wife raised their three children - Jason with Downs Syndrome. Everyone should read their story. I just want to "remeet" Tim and his amazing family!