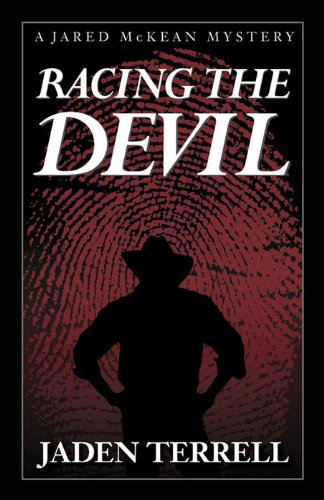 Nashville private investigator Jared McKean has a son with Down syndrome, a best friend with AIDS, an ex-wife he can’t seem to fall out of love with, and a weakness for women in jeopardy - until one frames him for murder.

His DNA and fingerprints are found at the murder scene, his voice is on the victim’s answering machine, and the victim was killed with a bullet from his gun. To make matters worse, his teenage nephew comes out of the closet and runs away to join a dangerous fringe of the goth subculture. Now Jared must find a way to clear his name, hold his family together, and solve a case that could cost him his life.

Jaden Terrell is a member of Mystery Writers of America, Private Eye Writers of America, International Thriller Writers, and the Tennessee Writers Alliance. The former special-education teacher is the executive director of the Killer Nashville crime literature conference and a SEMWA Magnolia Award winner. A graduate of the Citizen Police Academy and the FBI/TBI Citizen Academy, Terrell has a red belt in Tae Kwon Do and is certified in equine sports massage therapy.

Jared McKean used to be a police officer. Now he is divorced, a private investigator, and living with a childhood friend who has AIDS. HIs son, living with the ex-wife, has Downs Syndrome. He has raging hormones that complicate his life because he keeps getting involved with women who cause him trouble. Now he has been framed for a killing a woman whom he has no memory of knowing. Well, maybe they framed the wrong person as he puts his investigative skills to use to find the real killer.

Life is full of surprises as his investigation takes him into a world involving people ranging from horse trainers to the minister of a fundamentalist church. Everyone is not whom they seem, and his life is complicated by the problems of his friend, and further complicated in dealing with his ex-wife, his son, and a problem in his brother's family.

This is a dangerous world where people are getting killed for reasons that he does not understand. He does get a little help, but also gets a little battered.

This is the first Jared McKean novel by the author. and has a sequel A Cup Full of Midnight (Jared Mckean)

Jaden Terrell's "Racing the Devil" (a Jared McKean mystery) is a real winner. Beautifully written, this story set in Nashville has everything good going for it: engaging, well-drawn characters that don't fit the standard mold (Jared has a young son with Down's syndrome, and his best friend, roommate, and staunchest supporter, Jay, has AIDS) and a storyline that will keep you guessing till the end. From the moment Jared—who is still in love with his married ex-wife—enters a motel room with the woman he just met at a bar, till she is later found dead from a bullet fired from Jared's gun, Terrell shoots us around twists and curves with a wry sense of humor that makes it all work like a charm as Jared, an ex-cop turned private investigator, unravels the mystery of who has framed him and why. Next in the series is "A Cup Full of Midnight," and I can't wait to read it.