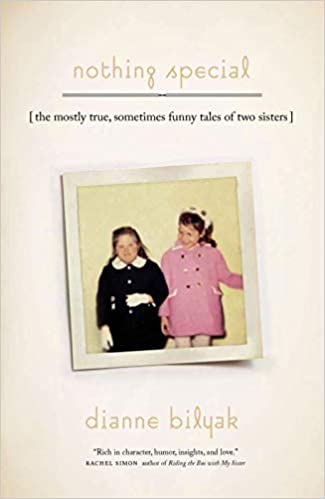 Nothing Special is a disarmingly candid tale of two sisters growing up in the 1970s in rural Connecticut. Older sister Chris, who has Down syndrome, is an extrovert with a knack for getting what she wants, while the author, her younger, typically developing sister shoulders the burdens and grief of her parents, especially their father's alcoholism. In Nothing Special Bilyak details wrestling with their mixed emotions in vignettes that range from heartrending to laugh-out-loud funny, including anecdotes about Chris's habit of faux smoking popsicle sticks or partying through the night with her invisible friends. Poet and disability advocate Dianne Bilyak strikes a rare balance between poignant and hilarious as she paints a compassionate and critical real-world picture of their lives. They struggle, separately and together, with the tension between dependence and independence, the complexities of giving versus receiving, the pressure to live as others expect, and in the end, the wonderful liberation of self-acceptance.

I loved the book! Being a teacher of Special Education and a parent of a special needs child it was nice to hear other people’s reality. I tried to make sure my special needs child didn’t over shadow my other child. I found what they were both good at and let them shine on their own. This book is very real & honest. An eye opener for families of all types of children.

I couldn't put this book down. Yes, this is a story about two sisters growing up in a small New England town but it is so much more than that. Dianne Bilyak has stitched together a memoir that is heartwarming, funny, and real. What is it like to have a sibling with Down Syndrome? How do you tell your story and her story without being unfair? Read "Nothing Special" and you will laugh, cry, and understand a little more. I highly recommend it and if you are in a book club I know it would be a hit with everyone.