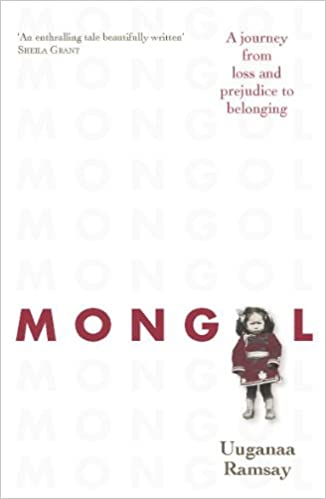 Mongol [mong-gohl], noun, 1. a member of a pastoral people now living chiefly in Mongolia. 2. (offensive) a person affected with Down's Syndrome. Uuganaa is a Mongol living in Britain, far from the world she grew up in: as a nomadic herder she lived in a yurt, eating marmot meat, distilling vodka from goat's yoghurt and learning about Comrade Lenin. When her new-born son Billy is diagnosed with Down's Syndrome, she finds herself facing bigotry and taboo as well as heartbreak. In this powerful memoir, Uuganaa skilfully interweaves the extraordinary story of her own childhood in Mongolia with the sadly short life of Billy, who becomes a symbol of union and disunion, cultures and complexity, stigma and superstition - and inspires Uuganaa to challenge prejudice. Mongol is the touching story of one woman's transformation from outsider to fearless champion of love, respect and tolerance. It's a moving tribute by a remarkable woman to her beloved baby son, testifying to his lasting impact on a sometimes imperfect world.

Having spent a few years living in Mongolia (and being married to a Mongolian) I always have a difficult time trying to convey the flow and the feel of life there. Other books take a factual textbook approach to explaining it but Uuganaa has captured the true spirit of Mongolia. Her struggles to adapt to certain aspects of western culture were also wonderfully captured and left me with a smile as my husband faced many of the same challenges.

Interspersed with her childhood in Mongolia is her son Billy's story, which I won't lie is a sad one and had me in tears throughout the book. However, it was told in a way that was so filled with love and purpose that you are not left feeling sad for the Ramsay family, but rather sad that you did not get a chance to know Billy as well. It is a wonderful tribute to her son and is a comfort to me as both a mother and as a person who lost a beloved child in their life.

I have the kindle version of this book and have purchased the paperback as a gift and will no doubt be purchasing more in the future.

I finished Uuganaa Ramsay's memoir 'Mongol' the night before last night. Uuganaa, who is Mongolian, and grew up in a 'ger' (yurt), is now in her mid-thirties, and lives in Scotland with her husband and their three children. Four years ago, she had a baby boy, Billy. Billy had Down's Syndrome and, tragically, because of heart complications, died at just three months old. In writing his story, and her own story, Uuganaa has turned her precious boy's short life - and her grief - into something beautiful.

She has become passionate about educating others about Down's. She's certainly in a unique position to comment on the misuse of the word 'mongol', historically used to describe people with Down's Syndrome. I learned that it was actually British doctor John Langdon Down - who had coined the term 'mongol' in 1860. Of course, conflating a disability with an ethnicity is both offensive and unhelpful. The word mongolism was officially dropped by WHO in 1965. I don't recall the word mongol ever being associated with my wee aunt who had Down's - we grew up together, she passed away in 2011, aged 50 - certainly not within our family. It's not uncommon, though, to hear people still using the word 'mong' pejoratively. I imagine it is heard in playgrounds. In 1970s/80s, when I was at school, 'spaz' was the word most likely to be used.

I enjoyed the honesty and simplicity of Uuganaa's prose: there's a certain clarity, I think, that comes with writing in a language that is not your native tongue. The final chapter made me cry. I don't often cry at books. And the early and middle chapters describing Billy are compelling and moving. I also enjoyed learning about Mongolia, gorgeous details like the pale blue paint behind the goats' horns to identify them as her family's herd. When we were kids, we would refer to somewhere very far away as being in Outer Mongolia, with little or no idea of where Mongolia actually is. This book is an education. The only yurt I have ever been in is the hallowed writers' yurt at the Edinburgh book festival, and it was fascinating to learn of actual lives lived in yurts, the daily routines. The strength of (extended) family bonds is very much highlighted.

'Mongol' is, as memoirs are, necessarily time-driven rather than plot-driven, and while I learned a lot about Mongolia, I felt there were some sections, where we perhaps get too many 'facts' and not much story. It can feel a *little* dry at times. However, halfway through, the narrative takes an unexpected turn and feels almost novelistic - I couldn't put the book down after this. And, as I said above, the final section, which deals with Billy's passing, made me cry. I read towards the inevitable event and I felt my throat tighten. I'm glad that Uuganaa and her husband had lovely hospital staff to support them through this dreadful time, though the image stays with me of an insensitive young doctor who came to Uuganaa's ward, earlier in the story, to see the 'floppy baby'.

I saw Uuganaa launch her book at a packed event a few weeks ago in Edinburgh. I was struck by her poise and grace when she read. I highly recommend her memoir, which is published by Scottish indie press Saraband. I'd love to read what she writes next.