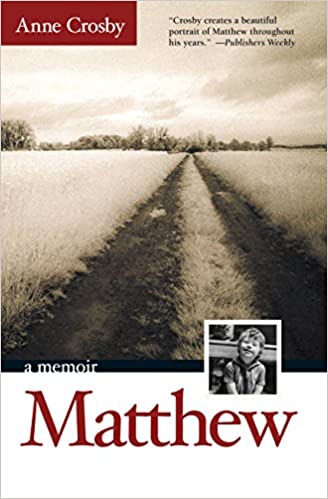 "Crosby creates a beautiful portrait of Matthew throughout his years…Crosby's memoir, both humorous and sad, is raw in emotion and unflinching in its honesty."—Publishers Weekly

"Anne Crosby has written a chronicle of caring—an account of a life that is at once painful, mysterious, and transformative. From draconian institutions to matronly neighbors to adoring friends, Matthew, his parents, and his sister travel a road of full of struggle, humor, and the unknown. This book will remind all people of good will of the enormous struggle that so many families have had to endure to gain even the simplest sense of dignity."—Timothy Shriver, Chairman, Special Olympics

From the moment she held him in her arms, Anne Crosby had deep fears for her newborn son. Although the staff at the hospital in London paid no attention to her concerns, her instincts were correct: Matthew had Down syndrome. After struggling with her contradictory feelings, Crosby set about doing whatever she could to help Matthew lead as full a life as possible.

Matthew is the moving, honest, perceptive, and often funny account of the life he made with the help of his mother and many other caring people. With an eye for detail and an acute ear for voices, Crosby describes Matthew's family and friends, doctors and teachers—a large cast that includes Gladys Strong, his Cockney caregiver, the famous child psychologist D.W. Winnicott, and Princess Anne, a benefactor of Matthew's boarding school. Crosby evokes the forbidding atmosphere of Normansfield, the residential institution founded by the doctor who gave his name to Down syndrome; the spaciousness of Mentmore, the country estate where she often took Matthew to play; and the touching camaraderie of the hospital ward in which Matthew died of heart failure at age twenty-five.

In this remarkable memoir, Crosby also explores Matthew's inner life, telling of his mimicry and unexpected humor, his outbursts of affection and occasional fits of misery, his gallantry toward his first love, and his disappointment over the loss of his first job. Crosby's portrait gives us an image of Matthew that deepens our understanding of what it means to be human.

"I knew and liked and respected Matthew. I thought he merited a biography, and I'm very glad that he now has one, especially that it is such a very good one. In this singular story, Anne Crosby tells us of Matthew's outer and inner life: his sad acceptances, his capacity to love and fall in love, his ambitions and their fulfillment, and his idiosyncratic sense of humor. Anne Crosby is able to tell us all this because, as we learn again from this book, love and knowledge are very much related. Matthew was a mystery to many. But because his mother empathized with him so keenly and has captured him so precisely with her sharp intelligence and brilliant powers as a writer, Matthew comes to us in this gripping book as a whole and delightful and unforgettable person."—Galway Kinnell

Anne Crosby was born into a large family in England in 1929. Crosby received little formal schooling as a child, due to the turmoil of the Second World War, her father's "experimental" ideas about education, and having been diagnosed with dyslexia. She came to excel in art school, and at the age of twenty she lived abroad for several years in Rome, Paris, and the Var region of France. After returning to London she painted and taught in art schools. In 1960 she married Theo Crosby with whom she had a daughter, Dido, and a son, Matthew. She continues to paint, and now divides her time between Washington, DC, and London. Matthew is her first book.

I found Matthew to be a very surprising book. First, I was surprised by Anne's honesty about her initial feelings towards Matthew. She's honest throughout the whole book which really gives you a deep understanding of their lives. Secondly, I was surprised to find that I was more touched by the humorous parts than the sad parts. Anne does a great job of conveying Matthew's sense of humor and wit. Overall, I thought this book was beautifully written and a surprisingly uplifting and entertaining story.

I guess I'm glad I read this, because it gives me a good idea of just how far we've come with Down syndrome. It was absolutely painful to read, though. She has no hope for her son at all. She fights against anything that would look like progress for him. She basically gives him to a neighbor until it's time to send him to an institution. And the institutions are horrible, but she just goes along with it.