↓ Skip to Main Content
Home › Book › Life As We Know It: A Father, a Family, and an Exceptional Child

Life As We Know It: A Father, a Family, and an Exceptional Child 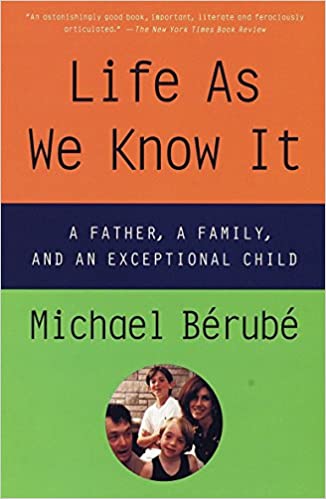 When Jamie Bérubé was born with Down syndrome in 1991, he was immediately subject to the medical procedures, insurance guidelines, policies, and representations that surround every child our society designates as disabled.  In this wrenching yet ultimately inspiring book, Jamie's father, literary scholar Michael Bérubé, describes not only the challenges of raising his son but the challenge of seeing him as a person rather than as a medical, genetic, or social problem.

I read this book when it first came out a few weeks after my daughter (subsequently dx with Asperger Syndrome) was born. Minor disclosure: I went to grad school w/Berube and his wife, though I didn't know them. I've recommended this book to any number of people over the years: I've found him incredibly good at and honest about describing the kinds of thought experiments and adjustments parents have to go through. Yes, he gets into politics, deaf culture, philosophy, and law, which makes sense given his and his spouse's line of work and what I am sure are general habits of mind. I found it helpful, personally: there are a lot of memoirs out there that describe individual experiences; there are much fewer that frame those experiences within broader contexts such as policy, education, law, and yet those contexts affect our experiences (and our children's experiences) very profoundly.

Life As We Know It: A Father, A Family, and an Exceptional Child is part memoir, part philosophical reflection part social and political commentary: the curious academic genre known as “autocritography.” For Michael Berube, a young academic at the time his youngest son Jamie was born with Down syndrome, this book grapples with how the theories that shape his academic work also inform his personal life. Evolution and postmodern philosophy lead Berube to reject the notion that human beings are inherently valuable, but his work tries to make society a better place for all human beings. He demonstrates that extreme representations of Down Syndrome children—as either radically incapable at one extreme, or as miraculous gifts at the other—limit our ability to imagine a world in which people with Down Syndrome are understood to be capable of participating in public life. Drawing on theorists as diverse as Foucault, Wittgenstein, Habermas, and Rawls, he critiques Western society’s tendencies to view people as objects, and offers a celebration of society’s creation of social systems that support parents caring for a Down Syndrome child. Regardless of whether you agree with Berube’s philosophical positions, his challenge to live as people of empathy and imagination will be welcome to all who long to create a more just world.