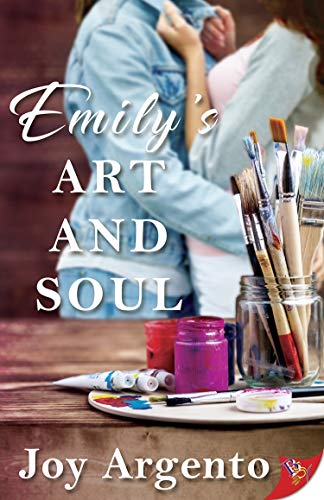 High school teacher Emily Sanders’s bucket list didn’t include getting divorced and starting a new job in a new city. Those challenges pale, however, when her mother dies and Emily finds herself caring for her sister who has Down syndrome.

When Emily meets Andi Marino she thinks she’s found a new best friend, just the right kind of fun and caring person to keep her from spending every weekend alone. So when Emily discovers she’s a lesbian and wants to explore her feelings for women, Andi seems like the perfect social guide. Except Emily doesn’t know that Andi has been attracted to her from the start and is fast falling in love with her. Caught up in exploring her sexuality, will Emily see the only woman she needs is right in front of her?

The sign of a well crafted novel for me is I am so vested in the characters that I can’t put the book down. That was my very enjoyable experience with Emily’s Art and Soul.
Emily Sanders is looking to start a new chapter in her life by moving to a neighboring city and starting a new job. She is dealing with the end of an unsatisfying marriage coupled with the death of her mother. The death has caused her father to spiral down into a black hole of despair so Emily’s adult sister Mindy, who has Down syndrome, moves with her.
Emily starts her new job as an art teacher in a Syracuse school and immediately connects with the math teacher Andi. While Andi is not out to everyone at school, she does readily share with Emily that she is gay. The story tells Emily’s story of exploring her sexuality and the role Andi will play in her life. Mindy is an absolute delight as an eternally happy young adult who sees everyone she meets as her new best friend. The author’s wonderful command of humor and crisp dialogue are refreshing and key to the success of this book. Looking forward to the next novel from Ms. Argento.

I ARC received via NetGalley and in exchange for an honest review.

This was a cute romance.

Emily is art teacher who mother recently died and she has to take on the responsibility of her sister Mindy who has Down syndrome.

When Emily start her new job she meets Andi who is a math teacher and they become fast friends.

Andi is gay and she start to feel more Emily then a friend should so she decide to keep her feelings to herself because when she was younger she had a bestfriend that she had feelings for but when she confess she was gay to her and about her feelings her friend Mary turn her back on her.

Emily never thought about being attracted to women before until she met Andi as she realize she been gay her whole life and that she been hiding it from herself she decide to explore her sexuality and play the field but what she really want to do is confess her feelings to her best friend Andi but are afraid Andi doesn't feel the same way so she tries to date a few women but doesn't turn out great.

Emily decide to be brave and tell Andi how she feels and to her surprise Andi feels the same way so they decide to be together but take it slow because Andi want to make sure Emily is ready for this.

We do learn about Andi family I wish we got to meet them in this book but we did get to meet Emily father who had a drinking problem because he was still mourning her mother but is doing better she tells him that she gay and he doesn't take it well and she shut herself off and this cause some conflict with Andi because she was worried about her but they work it out and Emily father who had time to think tell Emily he love her and that she still the same person.

I love Mindy she was funny and I love her bond with Emily.