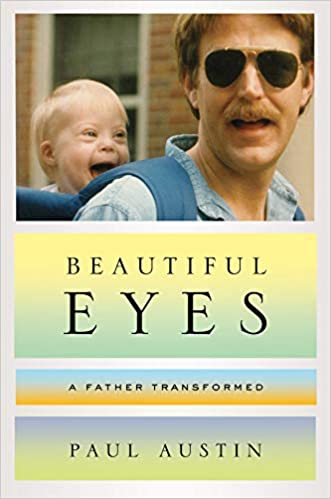 In 1987, Paul Austin and his wife Sally were newlyweds, excited about their future together and happily anticipating the birth of their first child. He was a medical student and she was a nurse.

Everything changed the moment the doctor rushed their infant daughter from the room just after her birth, knowing instantly that something was wrong. Sarah had almond-shaped eyes, a single crease across her palm instead of three, and low-set ears―all of which suggested that the baby had Down syndrome.

Beginning on the day Sarah is born and ending when she is a young adult living in a group home, Beautiful Eyes is the story of a father's journey toward acceptance of a child who is different. In a voice that is unflinchingly honest and unerringly compassionate, Austin chronicles his life with his daughter: watching her learn to walk and talk and form her own opinions, making decisions about her future, and navigating cultural assumptions and prejudices―all the while confronting, with poignancy and moving candor, his own limitations as her father.

It is Sarah herself, who, in her own coming of age and her own reconciling with her difference, teaches her father to understand her. Time and again, she surprises him: performing Lady Gaga’s "Poker Face" at a talent show; explaining how the word "retarded" is hurtful; reacting to the events of her life with a mixture of love, pain, and humor; and insisting on her own humanity in a world that questions it. As Sarah begins to blossom into herself, her father learns to look past his daughter’s disability and see her as the spirited, warmhearted, and uniquely wise person she is.

I enjoyed reading this book. Though not as engaging as George Estreich's The Shape of the Eye, Dr. Austin writes a clear and poignant memoir of his parenting experience. There is a tidy arc to his development, from being confused and bewildered initially to later understanding, accepting and even marveling at his daughter's gifts as she grows older. Sarah comes across as a wonderful human being, a tribute not only to herself but to the parents who raised her. (If you're reading this, Sarah, it's been a pleasure getting to know about you. I hope you have an awesome life!)

My only quibble, would be the lack of insight Paul Austin displays in parts of the narrative. He spends considerable time (rightfully) criticizing others for failing to see the inherent humanity in people with disabilities. But at the same time, he has no compunctions about judging a sympathetic woman at the supermarket counter. He takes her to task for her grocery choices, her poor grammar, her dyed hair, her eyeliner. Even her unbuttoned blouse. And all this for a woman who just wanted to share a kind word. Maybe he could show some of the humility he so vociferously demands from others?

Aside from this, however, it is a good read. I felt drawn into the lives of Paul and Sally as they raised a child who may have Down Syndrome but refused to be defined by it. May your tribe increase!

Dr. Austin was brutally honest in his own perceptions and misperceptions of his daughter. When he finally does realize how he has perceived his daughter for so many years and what he has missed because of it will break your heart. Reading how he resolves to change that and then does it will make you glad that you made the journey with him.

Scattered throughout the book are references to what children and adults with disabilities have had to deal with over the last few centuries. Some of it will shock you and some of it will anger you. All of it rightly so. There are people now arguing for some of the same failed eugenics policies of the 19th and 20th centuries. These are exceptionally well referenced and noted. At first, I thought they offered nothing to the story of his daughter, but by the end I felt differently. They certainly contributed to the story and it would have been a poorer one without them.

Regardless if you have a family member who is disabled or not, you should take the time to read this book and see that world through this man's and his daughter's eyes. You won't regret it.