↓ Skip to Main Content
Home › Book › Another Season: A Coach’s Story of Raising an Exceptional Son

Another Season: A Coach’s Story of Raising an Exceptional Son 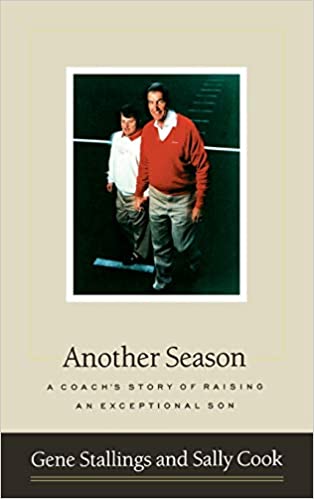 When beloved University of Alabama football coach Gene Stallings's son was born with Down syndrome and a serious heart defect, doctors predicted he wouldn't live to see his first birthday and urged Coach Stallings and his wife to institutionalize him. But for Gene and Ruth Ann that was not an option. Johnny quickly won the hearts and adoration of the Stallings family and everyone who took the time to know him, and, proving the doctors wrong by leading an active life, he became a vital and important part of his family, his community, and his father's career. With intimate glimpses of family life and thrilling football anecdotes, ANOTHER SEASON is brimming with poignant lessons about defying the odds and finding joy in every moment.

This book is a fairly typical first person account of raising a child with a disability, but I would recommend it because of the historical perspective. The authors recount Johnny's early days as a child with Down Syndrome in the 60's, before PL 94-142 was passed enabling him to attend school. It alludes to some of the stumbling blocks in terms of acceptance of kids with disabilities in the public schools, and is useful for helping us to realize how far we have come in terms of this.

It is also a testimonial to how well a person can do in spite of the lack of early education, when he has family that includes him and doesn't shelter or hide him. It further illustrates the father's and family's evolution in their own acceptance and ultimate true appreciation and devotion to Johnny as the person that he is (was).

Gene Stallings, the coach of Alabama, had a son with Down Syndrome. The doctors didn't expect Johnny to live past his first year. His purpose for writing Another Season was to show the people in the world, who have children with Down Syndrome, that even though its tough you can't give up. There are answers for the questions they are asking. It is hard and it takes a toll on family. If you love your child enough, you will get through it for them.

The theme of this novel is that when life gets tough, you have to work harder. Another Season was written by a football legend. Gene Stallings was very well known for being a fantastic coach who never gave up. Throughout his life he dealt with some difficult things. His third child was born with Down Syndrome, going from one job to another, and juggling family with coaching.

Another Season is an example of a narration. The story starts out foreshadowing thirty years later in Gene's life. Then it goes back to the day Johnny was born. From there it goes in chronological order of Gene Stalling's life. He tells us about his different coaching jobs, Johnny's health and family. The style is very effective in being that it was almost like he made a timeline first and then wrote them for the book.

I thoroughly enjoyed this book. I particularly liked it because I know someone with Down Syndrome. What really caught my attention where the parts about Johnny. I think it is so fascinating reading about his life. Talking about his job and the drama he deals with in his job was boring to me. I just couldn't stay focused because it wasn't interesting to me. If i could have changed something in the book it would be more excited. Another Season is about 45% about Johnny and 55% about football. I would make it so it was more even between football and Johnny. The football portion of the novel should be more interesting so you won't lose readers. Overall, I would recommend this book to anyone who likes football who just a simple book about real life.