↓ Skip to Main Content
Home › Book › Why Not Them? 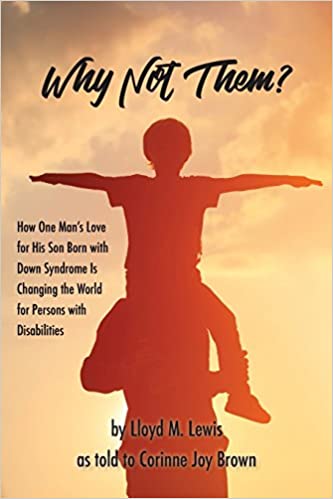 Lloyd Lewis's account of personal transformation and how he revolutionized a company by employing persons with disablities has a postive message that heals and inspires. More than just a story of personal triumph, or trials of a father and his son born with Down syndrome, its about the commitment to a dream, a community, and to advocacy for those in need.

What an incredible story of a father's love for his child as he has a son with down syndrome and he realized there is nothing wrong with him and it is the world that is backward. The work he does to make things right for his son and others like his son is truly inspiring. I loved this book.

I try to read outside my normal go-to genre fiction categories several times a year just to feel the pulse of what else is out there, including what’s new in nonfiction. Lloyd M. Lewis’s book is definitely nonfiction and definitely outside my comfort zone, but once I started it, it was hard to put down.

It didn’t hurt that one of my favorite authors Corinne Joy Brown, “ghost wrote” the story. (Check out her own Hidden Star, an historically-based fiction about the camouflaged identities of refugee Jews fleeing the Spanish Inquisition during the sixteenth and seventeenth centuries in the colonial American Southwest.)

The focus of this book is the world of Down syndrome (DS) families and the trend to integrate DS individuals into the mainstream. Author Lewis tells a very personal story, starting with the birth of his own son with DS, also known as Trisomy 21 (so called because the condition is the result of an extra or sometimes partial third copy of chromosome 21), and the transformative journey he takes alongside his son.

It’s not always an easy read, but it’s never maudlin, and the journey reaches an (ongoing) triumph that’s satisfying.
It’s also educational for an era when inclusivity is a growing part of our cultural awareness. For example, I didn’t realize that one in 800 persons are born with the condition. At least passingly, chances are we all know someone from a family with a DS relative. But Lewis is not your average family member.

With a longtime professional background as a corporate financial analyst, Lewis put his skills to work by rising from consultant to CEO of a Colorado-based chain of thrift stores with the mission of providing employment to a high percentage of physically and mentally challenged individuals.

This book follows Lewis’s own journey alongside his son’s, and the father’s growing commitment to mainstream others besides his son into work environments that are holistic.

As a result, the book includes many vignettes on others in the thrift chain – both employees and dedicated managers – and along the way does an impressive job of personalizing this so-often overlooked segment of the population and their struggle to find meaning and purpose in their lives.

I recommend the book. It’s an uplifting read even as it challenges readers to reassess what they thought they knew about those born with DS. Their spirit and their personalities may just surprise you.