↓ Skip to Main Content
Home › Book › When David Was Surprised

When David Was Surprised 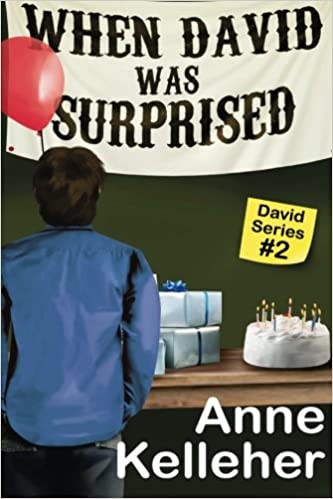 What readers are saying about this series:

"How David Met Sarah" is terrific... the character of David has a lot of heart, is full of happiness and is very thoughtful. Anne Kelleher wrote from her experience of what it’s like to have a brother with a disability. If you want my advice, you should read this book about the world of young adults with Down syndrome.

Actor Chris Burke, “Corky” from Life Goes On and Goodwill Ambassador for the National Down Syndrome Society

"How David Met Sarah" is a rare resource that not only entertains but also exposes the realities of what it’s like to live with a disability. Ultimately, though, [the books's] greatest achievement may be something far simpler: It reminds us that, no matter our background, we all desire the same things in life – and that a sense of love and belonging is chief among them. While "ground-breaking" is not a term to be used lightly, "How David Met Sarah" is deserving of such praise, and so much more.

As the mother of a developmentally delayed adult son, I can tell you that Anne Kelleher is a gifted storyteller and takes it to another level with a book that anyone with a family member with special needs can relate to. This is a heartfelt story full of emotions for anyone to enjoy. I found myself rooting for David and Sarah and wanting more at the end. I hope there's a sequel.

A Mom from Wallingford, PA

Reading specialists, special education teachers and librarians agree that there are no other titles like this available. "When David Was Surprised," is the second in a series of five books written for intellectually or developmentally disabled individuals and those who love them or wish to see the world through their eyes.

David is a young man who works in a mailroom and lives at home with his parents. In the first book, "How David Met Sarah," a young woman moves to his neighborhood and begins to attend his church. David believes she’s the girl of his dreams, and would like her to become his girlfriend.

In this, the second book in the series, David encounters some unexpected conflicts between family members as they search for the right way to handle his growing independence. David is determined to ask Sarah on a date -- but there is someone else who is also interested in him! Through a series of adventures (and a few misadventures) that illustrate the challenges and rewards of life as a differently-abled person, David gets a chance to show the girl of his dreams how much he cares.

"When David Was Surprised" is a very special story written from the point of view of a young man who is developmentally disabled. It includes suspense, conflict, romance, and all the appeal of an adult book while using vocabulary appropriate for those who read at an elementary level.

The author, who has been published multiple times and translated into five languages, was inspired to write this story by her brother. The real "David" is no longer interested in children's books but is unable to read traditional adult novels. For him, and for people like him, the David series will satisfy a previously unfilled need for accessible and entertaining stories.

For further information, read about the David series at http://howdavidmetsarah.blogspot.com or see videos of the author and her brother, the man who inspired the book series, at http://www.youtube.com/user/Howdavidmetsarah.

There are two main plot lines at the heart of When David Was Surprised. The first involves David's desire to invite his friend Sarah ("the girl of my dreams") on a real date. Sarah has Autism, which impedes her ability to communicate with others. Though David understands that Sarah may say "no" - or that she may not respond at all - he simply wants the opportunity to ask her. The second, rather comical, storyline involves a surprise birthday party that David's family is planning for him - and all the mishaps and misunderstandings that complicate that process.

At its core, this particular book is about a young man wishing to assert his independence. As if doing so isn't daunting enough at times, David also has to contend with well-meaning but over-protective grown-ups who are so concerned that he might get his feelings hurt that they don't realize that they are infringing upon his right to take that chance. It's a common theme, but one that Kelleher handles with uncommon grace. (Readers will empathize with David's dilemma - and they'll cheer him on as he valiantly embraces the obstacles in his way, even learning how to ask Sarah out on a date in sign language should the opportunity arise.)

Of course, there's a lot more to the book than that. As readers venture through day-to-day life with David, they will be exposed to his many relationships and routines - an experience that sheds light on his universal triumphs and tribulations (Work! Jealousies! Family feuds!) while also illustrating how he enriches the lives of those around him by virtue of his presence. The focus, then, is firmly on David's abilities (rather than his disabilities), which provides a subtle but oft needed reminder that, despite our apparent differences, we're all still very much the same.

If How David Met Sarah was a "groundbreaking" debut, then When David Was Surprised is a worthy follow-up. Both entertaining and poignant, it beautifully illustrates relatable and resonant themes such as tolerance, friendship, love and self-empowerment. This book may be short on pages but it's long on ideas - and big on heart! - John Valeri, Hartford Books Examiner

Another good book in Anne Kelleher's David series, written from the point of view of a young man with Down Syndrome. David is caught up in the expectations of his family with regard to how much independence he should have. Just about to be 25, he is interested in a romantic relationship -- is that appropriate for him? Is the young woman's family in agreement? What if David gets hurt?

This series and this book in particular raise important questions about how we relate to developmentally disabled people and how they relate to other folks. What's wonderful is that the story is also entertaining, and gives us a fascinating glimpse into this world.

"When David Was Surprised" and "How David Met Sarah," (the first book in the series), are essential books for readers who are themselves developmentally disabled and for those who love them. In addition, anyone interested in gaining some insight into this population is urged to pick up a copy.

Written at an elementary reading level, these books are nevertheless fun and informative for anyone.