↓ Skip to Main Content
Home › Book › Life with a Superhero: Raising Michael Who Has Down Syndrome

Life with a Superhero: Raising Michael Who Has Down Syndrome 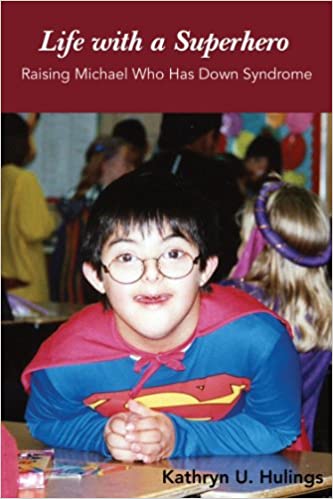 Over 20 years ago, in a small Israeli town, a desperate mother told a remarkable lie. She told her friends and family that her newborn child had died. That lie became the catalyst for the unfolding truth of the adoption of that same baby - Michael - who is, in fact, very much alive and now 22 years old. He also has Down syndrome.

When Kathryn Hulings adopted Michael as an infant, she could not have known that he would save her life when she became gravely ill and was left forever physically compromised. Her story delights in how Michael's life and hers, while both marked by difference and challenge, are forever intertwined in celebration and laughter. With candor and a sense of humor, Life With a Superhero wraps itself around the raucous joy of Michael's existence with his four older siblings who play hard and love big; how Kathryn and her husband, Jim, utilize unconventional techniques in raising kids; the romance between Michael and his fiancee, Casey; the power of dance in Michael's life as an equalizing and enthralling force; the staggering potential and creativity of those who are differently-abled; and the mind-blowing politics of how Kathryn navigated school systems and societal attitudes that at times fought to keep Michael excluded from the lives of kids deemed "normal".

No other books about the parenting experience outline what to do when, say, a child runs across the roof of a tri-level house pretending he can fly, or shows up in a 7th grade social studies class dressed like Spiderman, or calls 911 when his girlfriend breaks his heart. But, as Michael's mom, Kathryn, has been trying to figure how to be a mother in just such circumstances - sometimes with success, sometimes with dismal failure - for over two decades.

This book is at times laugh out loud funny, heartwarming, thought-provoking and uplifting. Setting aside Kathryn's potty-mouth, I loved this book! There is something so wonderful about people with Trisomy 21 and the love and exuberance they have for life. I learned things about love, inclusion, motherhood and joy from reading this. Although I know Kathryn and her family and work at Michael's junior high (now a middle school), there is no reason someone unknown to their family can't absolutely enjoy reading this. In fact, getting to know their family through this book would be a treat. I recommend it to anyone who loves a funny, heartwarming story about a normal family in occasionally extraordinary circumstances.

A huge thank-you to Mrs. Kathryn U Hulings for opening up your heart and writing about your wonderful life with Michael. What an incredible journey, not to mention uplifting!!! I read a few true stories of Down Syndrome but they only go up to a certain age so this was a treat to read about a child from birth to adulthood,trying to make a space in the world. As a child and now an adult living with mild CP, I could relate to some of the things that were discussed in the book about inclusion and trying to face the world as a person living with a disability. This made me realize that I am not alone. So I thank the author again and I am proud to give Life With a Superhero 5 stars, and would be the first to recommend it to people who are struggling with a disability or are struggling because someone they love has a disability.