Just Beyond the Clouds: A Novel (Cody Gunner Book 2) 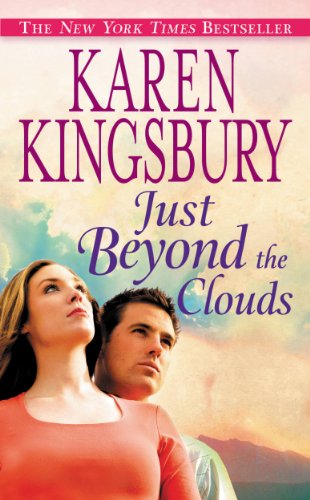 Still aching over his wife's death, Cody Gunner can't bear the thought of also letting go of his Down's Syndrome brother, Carl Joseph. Cody wants his brother home, where he will be safe and cared for, not out on his own in a world that Cody knows all too well can be heartless and insecure. So when Carl Joseph's teacher, Elle, begins championing his independence, she finds herself at odds with Cody. But even as these two battle it out, they can't deny the instinctive connection they share, and Cody faces a crisis of the heart. What if Elle is the one woman who can teach Cody that love is still possible? If Cody can let go of his lingering anger, he might just see that sometimes the brightest hope of all lies just beyond the clouds.

In characteristically heart-wringing, tear-jerking style, bestselling inspirational novelist Kingsbury finishes the story of Cody Gunner she began in A Thousand Tomorrows. Elle Dalton is director of an Independent Learning Center for Down Syndrome adults when she meets Cody, her student Carl Joseph's brother, who is intent on removing Carl from the center. Romance ensues between Elle, still brokenhearted over being jilted at the altar four years ago, and Cody, an angry bull rider who still grieves the loss of his wife to cystic fibrosis. Meanwhile, it's up to Elle-and Carl Joseph-to show Cody that Down Syndrome adults are capable of much more than most people believe. Kingsbury handles the many point-of-view changes with aplomb, although the chapter told from Carl's perspective is less successful. Some readers may wonder about the literary value of auctioning off a character spot in a novel to the highest bidder (the money goes to charity), as is done here, and there is some telling instead of showing and repetition in the prose. But the plotline is sweeter than sugar, and Kingsbury makes an admirably strong advocacy statement for Down Syndrome adults. Kingsbury's legions of inspirational fiction fans should find this exactly to their taste; new readers will also discover that it reads well as a stand-alone.
Copyright ©
Published: September 14, 2007
Genres:
Fiction
Tags:
Romance
Reviews:Cindy B. on Amazon wrote:

Good storyline. I think this series is more fitting for a younger generation audience – I'm 66 yrs of age. Although I enjoyed the insights regarding challenges that families with Down's Syndrome babies have had to endure since forever...but how the stigmas can be overcome by acceptance for the often misunderstood thinking that D. S. babies should never be brought into this world. Nothing could be further from the truth. They have so much to teach us about innocence in human nature, boundless love and acceptance to give to those who take the time to help them be the best person they can be, and that they too know the meaning of true love.
This story also gives great insights into the many struggles people everywhere, throughout society, deal with when they have what looks normal on the surface, but is hidden inside the body when they suffer with illnesses like, Cystic Fibrosis, M.S., and the list goes on. All the more reason to be more kind, loving, and helpful to people all around us on any given day, bc we know not what they may be dealing with unless we walk a mile in their shoes.
The heart of this book series has all of the above woven throughout, giving anyone who reads it the messages of faith, hope, and love...the greatest being LOVE. ♡♡♡

When Cody returns home to spend more time with Carl Joseph, he finds things a little different from what he expected. Carl Joseph is going to a special school, just for those with Down Syndrome. It is set up to teach those with Down Syndrome how to be productive and self sufficient adults with a little help from their friends and family. This goes against all Cody ever expected for Carl Joseph. Cody must learn he doesn't have all the answers like he thought. Meeting Elle upsets his mind and his world. This book is exciting and well written, it gives changes and depth of character new meaning. Meeting these new people and learning to live life after his loss of Ali is a challenge for Cody but, one he must make if he wants to make Carl Joseph happy. Exciting and a wonderful book. I would recommend to all Karen Kingsbury fans.