Entwined: Sisters and Secrets in the Silent World of Artist Judith Scott 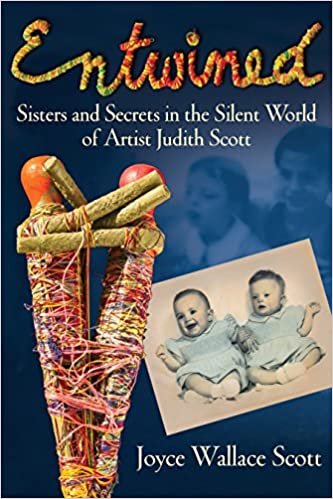 The remarkable story of “outsider” artist Judith Scott, who was institutionalized for more than thirty years before being reunited with her sister

From birth, fraternal twins Judith and Joyce Scott lived as if they were one person in two bodies, understanding instinctively what the other wanted and felt, despite the fact that Judy had Down syndrome, profound deafness, and never learned to speak or sign. But this idyllic childhood of color, texture, and feeling ended abruptly when, at age seven, Judy was taken from their shared bed while Joyce slept, not knowing that the wholeness they had known was being shattered.

For the next three decades, Joyce is left without her other half and must grieve unexpected loss while navigating her relationship with an emotionally distant mother—alone. Even so, her life parallels her twin’s in surprising ways. While in college, Joyce too is sent away, pressured to relinquish the secret daughter she bore in hiding to adoption.

Decades later, Joyce resolves to reunite with her sister and fill their remaining years with joy. After overcoming legal hurdles to become Judy’s legal guardian, she enrolls her in an art center for adults with disabilities in Oakland, California. Judy is hesitant at first, but after two years of uninterested painting and drawing, her untapped creativity suddenly ignites when she is introduced to fiber art, and she begins carefully and intentionally winding yarn and other materials around combinations of found objects. With unflagging intensity, Judy works five days a week for the next eighteen years, producing more than two-hundred astoundingly diverse fiber sculptures. Unconcerned with her growing fame, she remains fully immersed in her artistic vision until her death in 2005. Today, Judith Scott’s work is displayed in museums and galleries around the world, in some of the most prestigious collections of contemporary art.

Entwined is a penetrating personal narrative that explores a complex world of disability, loss, reunion, and the resiliency of the human spirit. Part memoir, part biography, Entwined is a poignant and astonishing story about sisters finding their voices in each other’s love and through art.

Full disclosure: Joyce Scott is a friend, and I am biased. However, I want to speak as eloquently as I can about her distinctive voice and her extraordinary story. (Yes, literally) I couldn’t put it down. Joyce and her editors have paced the book superbly. The account of her life during the separation from her twin will resonate with anyone who has carried on after a painful loss. The second part tells a story that earns the overused term miraculous: Joyce’s reclaiming of Judith as part of her family and the consequent emergence of Judith as a powerful artist, told straightforwardly but with poetic nuance. It is a wonderful read.

This story details the remarkable journey of artist Judith Scott and the enduring love of her twin sister who played a key role in making that journey happen. Judith and Joyce Scott are twins, one with Down syndrome, one without. They spent the first seven years of their lives together sharing the same bed, eating at the same table, playing in their yard under the giant mulberry tree. At age 7, on the advice of doctors, Judith was taken away and placed in an institution where the expectation was that she would live out the remainder of her life. Joyce writes in aching detail about how this separation left a void in her life and how, at the age of 40, after a period of extended silent meditation, she had an epiphany that would change her life and her sister's. Joyce assumed custody of Judith, removed her from the institution, moved her to the San Francisco Bay Area and enrolled her in an art program for people with developmental disabilities. Astonishingly, Judith developed a unique method of sculpturing found objects and yarn into large, bright body-like objects that captured the attention of art collectors. Her work has been exhibited around the world in prestigious collections and was recently featured at the Brooklyn Museum of Art in a one-woman show. An incredible story told with honesty and grace.