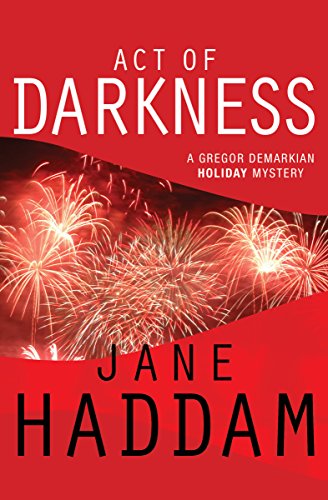 Stephen Fox may be a moron, but he may also be America’s next president. The dimwitted legislator is just smart enough to know when to smile for the camera. But two women stand in the way of his campaign: his mistress and his wife, who has never recovered from the death of their daughter, a pain she manages by devoting herself to fundraising for children with Down syndrome. During a weekend-long charity extravaganza on Long Island Sound, Fox’s candidacy goes off the rails in a spectacularly bloody fashion. Ex-FBI investigator Gregor Demarkian is the first on the scene. Fox’s entourage of political handlers may lie for a living, but Demarkian has a way of ferreting out the truth, and he will nab the killer before the last firework sounds.

This agreeable puzzle in the Agatha Christie mold is set in the corrupt realm of modern politics. Haddam ( Precious Blood ) isolates a group of manipulative, influential characters--at least one of whom is a murderer--at a Long Island Sound estate for a seminar about a much-publicized p. 143 proposed bill to benefit children with Down's syndrome. Among the power-mongers in attendance are doltish presidential candidate Stephen Whistler Fox, who has been having strange blackouts at fundraisers; his meek wife, Janet, grieving for a deceased child with Down's; his possessive, witchy mistress, Patchen Rawls; his shifty right-hand man, Dan Chester; and a specialist in the treatment of retarded children, Dr. Kevin Debrett. Debrett is found dead in his guest room with nary a wound nor a sign of struggle, and a second victim is soon to follow. Alert ex-FBI man Gregor Demarkian examines both crimes and drops hints about the murderer(s) in their midst. Juicy gossip abounds, tension builds and all present are suitably suspect as Demarkian expertly wraps up loose ends in this entertaining, satisfying mystery.
Published: June 1, 1991
Genres:
Fiction
Tags:
Mystery
Reviews:Jersrcit on Amazon wrote:

Great writer terrific character development. Love all the stories set in Philadelphia arround locals and people I grew up with
Am in the process of getting everything she ever wrote.

OK for a listen on a long car ride but somewhat disappointing. Really a 3- .