A Special Kind of Hero: Chris Burke’s Own Story 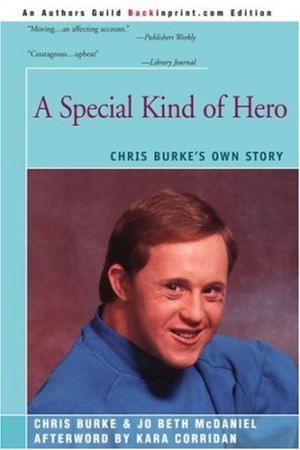 Chris Burke became one of Americas favorite personalities when he starred as "Corky" on the hit ABC television series "Life Goes On." Not since Helen Keller has one person so thoroughly changed the way the world views people with disabilities. Twenty-five years earlier, when Chris was born with Down syndrome, doctors advised his parents to put him in an institution. Instead, they showered him with love, and encouraged him to reach for his dreams. This is Chriss story, and the story of his familys love and determination. Here he tells what its really like to grow up with Down syndromehow he pursued his seemingly impossible show business goals...and how he has dedicated his life to helping people with special needs, especially those with what he calls "Up Syndrome." Profoundly inspirational, "A Special Kind of Hero" is a triumphant story of courage and hope that proves Chris motto: "Obstacles are what you see when you take your eyes off your goal.""A poignant, joyful and inspirational story." Literary Guild "Excellentfascinatinga realistic portrait of an intriguing individual."Down Syndrome News

What?: The story of a young man with Down syndrome whose desire to become an actor comes to fruition. He starred on the hit television series "Life Goes On" and through this series helped transform the stereotypes people had regarding individuals with Down syndrome, which he terms: "Up syndrome." His parents were told to institutionalize him, they refused, and the world is much better because of their decision to love their child unconditionally.

So What?: Students will learn that individuals with disabilities can pursue and accomplish goals that seem outlandish to some,but with dedication and persistence dreams can come true.

Now What?: I would use this biographical account as a means to teach students about fulfilling dreams. Although we might not get the "break" and make it to Hollywood, you can enjoy your craft anywhere you are and influence lives around you. To follow up, students will write about a dream of their own and describe how they feel when they are acting, singing, playing a musical instrument, writing poetry, a book, etc.

What an outstanding story! This book is so interesting and touching— it is one of the best books I have read in a very long time. Chris is an outstanding person with a highly supportive family, who he has brought tremendous joy and pride to. So accomplished and loved. I have a 14 year - old grandson with Down syndrome. He actually met Chris in 2012 at a Buddy Walk for Children with Down Syndrome in Virginia. Chris was the keynote speaker at that event. And we enjoyed his enthusiasm so much. I have been thinking lately— what will Robbie be when he grows up? And I remembered Chris and found this story. It is so motivational. Thank you Chris for sharing your life with us and Jo Beth McDaniel for writing about Chris and his inspirational life. Another job well done!