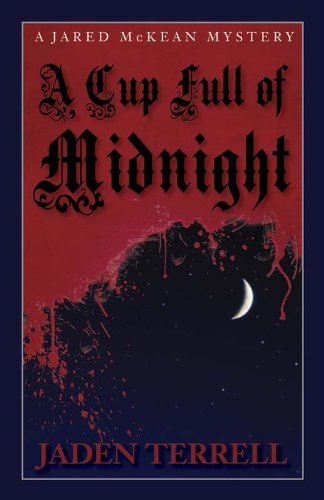 At 36, private detective Jared McKean is coming to terms with his unjust dismissal from the Nashville Murder Squad and an unwanted divorce from a woman he still loves. Jared is a natural horseman and horse rescuer whose son has Down syndrome, whose best friend is dying of AIDS, and whose teenage nephew, Josh, has fallen under the influence of a dangerous fringe of the goth subculture. When the fringe group’s leader—a mind-manipulating sociopath who considers himself a vampire—is found butchered and posed across a pentagram, Josh is the number-one suspect.

Jared will need all his skills as a private investigator and former homicide detective to match wits with the most terrifying killer he has ever seen. When he learns that Josh is next on the killer’s list, Jared will risk his reputation, his family, and his life in a desperate attempt to save the boy he loves like a son.

Jaden Terrell is a member of Mystery Writers of America, Private Eye Writers of America, International Thriller Writers, and the Tennessee Writers Alliance. The former special education teacher is the executive director of the Killer Nashville crime literature conference and a SEMWA Magnolia Award winner. A graduate of the Citizen Police Academy and the FBI/TBI Citizen Academy, Terrell has a red belt in Tae Kwon Do and is certified in equine sports massage therapy.

If you didn't read Jaden Terrell's Racing the Devil you missed a really good mystery novel. But don't worry--you don't have to have read it to be wholly enthralled and wholly satisfied by this second Jared McKean mystery. A Cup Full of Midnight is complete on its own, an intellectually thrilling mystery, psychologically scary and real, filled with memorable real-world characters and the sort of social commentary that comes from genuine conversation and honest concern. Jared McKean is a wounded protagonist with the strength to fight foes, the honesty to know when he's beaten and the determination to get up and carry on. He's frequently beaten but never down and out, and his concern for client, family, stranger and friend crosses boundaries of prejudice and bends the law with love.

A predator is dead at the start of this novel. Not just any predator, but one who preyed on McKean's own nephew. Nearly everyone is pleased he's gone. But the cops want to find out who killed him and teen victims suddenly find themselves facing exposure and accusation.

Lost children, suicide, and black magic rituals in the living room of an ordinary Nashville home; abusive neighbors, predatory friends, and teens role-playing as in a community center; broken relationships, a room-mate dying of AIDS and a son with Downs' Syndrome... Somehow they all mix together into a tale of human passion, fast action and riveting mystery. These characters could live next door. These wounds could be worn by neighbors anywhere. But a story this powerful is hard to find, a mystery this intriguing, or a narrator as brutally honest and generous and kind.
I'm lucky to have read both novels of this series. I'm eagerly awaiting more.

Disclosure: I received a free bound galley of this novel from the publishers in exchange for my honest review.

Jared McKean, 36 years of age and now a private detective after seven years with the Nashville Metro Police Department, has gone, as he describes it, from "uniformed patrol officer to undercover vice officer to homicide detective to outsider." Now he has his most important client ever: his nephew, Josh. Josh and his sister, 14-year-old Caitlin, are as close to him as anyone in his life, the boy feeling closer to him than to his own father. Lately Josh's life has been in a state of upheaval, having not long ago come out of the closet and left home to live with Sebastian Parker, known as "Razor," the sociopath who'd seduced him [a man in his late 20's to Josh's 16]. After the latter's murder a few days before, Josh had attempted suicide, and now `hires' Jared to find out who killed Razor. No simple task, since he seems to have engendered hatred in most everyone whose path he crossed. In what appears to be a ritual killing, he had been slashed to death, emasculated, eviscerated, and his body placed on a pentagram, surrounded by occult symbols.

The novel is a cautionary tale of disenchanted youth and the Goth sub-culture, "vampire wannabees." I was initially - but only initially - unsure whether this was a book for me, agreeing with the protagonist when he says "I didn't believe in magic spells or voodoo curses. I didn't believe in vampires or witches or things that go bump in the night. The only monsters I had ever seen were human."

This is the second in the Jared McKean series, following the terrific "Racing the Devil," and it doesn't disappoint. Jared's "ex" hits the nail on the head in explaining why she couldn't stay married to him, citing his career choice: "It's not what you do; it's who you are. You're a hero waiting for something to die for." Jared is a fascinating protagonist. Still on good terms with his ex-wife [now re-married and in her ninth month of pregnancy], they are both devoted to their eight-year-old Down Syndrome son, Paulie. He shares a ranch with his best childhood friend, Jay, now battling AIDS, and his three horses: Dakota, the rescued Arabian; Crockett, the Tennessee Walker; and Tex, the palomino gelding Quarter Horse. As the investigation continues, several suspects emerge, and Jared's investigation puts his life, and that of his nephew, at risk, and he becomes even more relentless. Well-plotted, the book has more than one heart-stopping moment. It was a very good read, and is recommended.