↓ Skip to Main Content
Home › Book › Happiness Is a Chemical in the Brain: Stories

Happiness Is a Chemical in the Brain: Stories 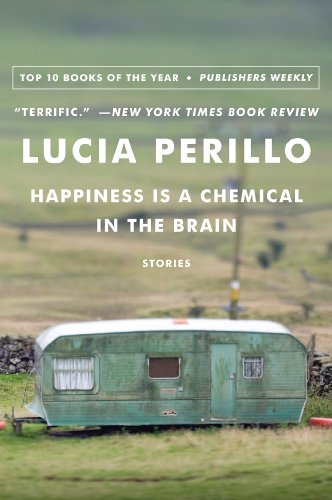 Populating a small town in the Pacific Northwest, the characters in Lucia Perillo’s story collection all resist giving the world what it expects of them and are surprised when the world comes roaring back.

An addict trapped in a country house becomes obsessed with vacuum cleaners and the people who sell them door-to-door. An abandoned woman seeks consolation in tales of armed robbery told by one of her fellow suburban housewives. An accidental mother struggles to answer her daughter’s badgering about her paternity. And in three stories readers meet Louisa, a woman with Down syndrome who serves as an accomplice to her younger sister’s sexual exploits and her aging mother’s fantasies of revenge.

Together, Happiness Is a Chemical in the Brain is a sharp-edged, witty testament to the ambivalence of emotions, the way they pull in directions that often cancel one another out or twist their subjects into knots. In lyrical prose, Perillo draws on her training as a naturalist and a poet to map the terrain of the comic and the tragic, asking how we draw the boundaries between these two zones. What’s funny, what’s heartbreaking, and who gets to decide?

The stories are wild and often weird. I had just finished her collection of her essays: . And had read several of her poetry collections. I hadn't realized that she also wrote fiction. Three of the stories are linked. A wild woman, her sister with Down's Syndrome, who is often her sidekick, and their mother who is angry about her life. In fact, many of these characters are women who feel they've somehow been cheated. The review in Good Reads introducing the writes, "The characters in Lucia Perillo’s story collection all resist giving the world what it expects of them and are surprised when the world comes roaring back." That's a good way of putting it. I was sad for most of them. Their views were daring, their actions often careless, and their lives fairly aimless. The writing is wonderful and surprising, but I was glad I didn't have to live in those stories myself. They seem like they could have been written by girls in high school who were much wilder, more daring than I was. Occasionally I tried on their styles, but I never pulled it off. I was much to romantic and melodramatic, plus I had a chipped tooth, a broken nose and a foot long scar on my knee. So I was shy. None of my friends had lives this tough. Good to immerse ourselves in all the ways there are for humans to be in the world. She catches moments perfectly.

I really enjoyed this collection of short stories. I'd like to give it somewhere closer to a 4.5. All of the stories were very well written, and most of them were very engaging. There were a few stories that tested my patience, but overall, this is a very solid collection. Highly recommended.