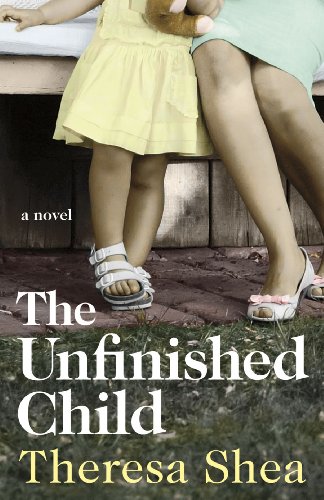 When Marie MacPherson, a mother of two, finds herself unexpectedly pregnant at thirty-nine, she feels guilty. Her best friend, Elizabeth, has never been able to conceive, despite years of fertility treatments. Marie's dilemma is further complicated when she becomes convinced something is wrong with her baby. She then enters the world of genetic testing and is entirely unprepared for the decision that lies ahead.

Intertwined throughout the novel is the story of Margaret, who gave birth to a daughter with Down syndrome in 1947, when such infants were defined as ""unfinished"" children. As the novel shifts back and forth through the decades, the lives of the three women converge, and the story speeds to an unexpected conclusion.

With skill and poise, debut novelist Theresa Shea dramatically explores society's changing views of Down syndrome over the past sixty years. The story offers an unflinching and compassionate history of the treatment of people with Down syndrome and their struggle for basic human rights. Ultimately, The Unfinished Child is an unforgettable and inspiring tale about the mysterious and complex bonds of family, friendship, and motherhood.

Margaret is a young woman expecting her first child during the late 1940's. She is in her early twenties, and healthy, so when her daughter is unexpectedly diagnosed with down syndrome at birth, Margaret is shocked. Margaret feels love for her daughter and wants to care for her, but is convinced by the physician that caring for the child will be a burden for her and her family. He tells her that she will go on to have healthy children, and that the best place for this child is in an institution, called Poplar Grove, where she can be properly cared for. Margaret names her daughter Carolyn, and reluctantly sends the newborn to an institution where she will be raised. She quickly goes on to have two healthy children, and finds herself busy with every day life, however, she never stops thinking of Carolyn and wondering what has become of her. Years later, Margaret musters up the courage to visit her daughter in Poplar Grove and is shocked an appalled by what she sees. This was not at all what she expected, and her newborn daughter is living a very different life than she thought. Margaret begins visiting on a regular basis, always bringing a single rose for her daughter. One visit, when Carolyn is a teenager, Margaret is shaken by a horrifying secret that she never could have imagined. Her worst fears have come true.

Marie and Elizabeth are long time friends, entering their forties. Both are married, and Marie has two daughters, while Elizabeth has been struggling to conceive for years. Marie finds herself suddenly and unexpectedly pregnant and has a nagging feeling from the beginning that something is wrong. Despite her doctor, husband, and friends telling her that everything looks fine, and that she is just being paranoid, she can't get it out of her mind that something is just not right. Soon, she is forced to make decisions that she never thought she would be faced with. In the meantime, Elizabeth is finding out some information about her past. The two women are suddenly connected in new ways and have to make painful decisions!

The way that the three women's lives weave together left me wondering what would happen until the end. I never could have guessed how the women would all be connected. As a disability studies student, I found the differing viewpoints on children with down syndrome to be very accurate and well thought out. I was wishing that the novel took different turns at many points, however that would not be as realistic as the way that the novel actually panned out. This was a great read and I thoroughly enjoyed it!

This was a very emotionally difficult book for me to read as a parent of a child with Down Syndrome. However, the author gives a heartwrending and honest view of the pain felt from an initial diagnosis of Down Syndrome.

She also gives a beautiful picture of true friendship, growth and forgiveness.

I do wish; however, that she gave a more realistic view of the hopefullness of living with Down Syndrome in recent years. There is so much negativity shared that is based on outdated research, that parents who receive a diagnosis never hear. For example, did you know that divorce rates amongst couples who have a child with down syndrome is LESS than in the general population? (http://www.mc.vanderbilt.edu/reporter...) I mention that statistic in particular as the characters of this book viewed the strain on their marriage as one of the reasons they feared they could not handle their child.

Despite this, I do think the author did a very compassionate and realistic portrayal of the pain and ethical dilemmas experienced by the families AND doctors in this story.

Saying that, I do not recommend this for just anyone. If you have very recently received a pre-natal diagnosis, this may not be the book for you. Give yourself time and distance before you pick up this story to read. (I wept unconctrollably throughout this book.) In the meantime, look for some local resources who can give you less clinical information on DS, or visit the International Down Syndrome Coalition at www.idsc.org or their facebook page, https://www.facebook.com/Internationa... to connect with a network of parents, educators, and advocates who want to joyfully share about the beautiful children and adults in their lives who live a full life with a diagnosis of Down Syndrome.