The Delightful Life of a Suicide Pilot (A Dr. Siri Paiboun Mystery Book 15) 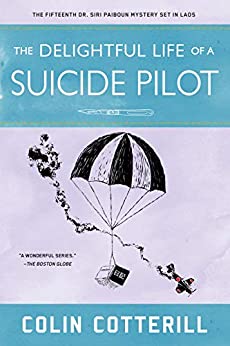 Laos, 1981: When an unofficial mailman drops off a strange bilingual diary, Dr. Siri is intrigued. Half is in Lao, but the other half is in Japanese, which no one Siri knows can read; it appears to have been written during the Second World War. Most mysterious of all, it comes with a note stapled to it: Dr. Siri, we need your help most urgently. But who is “we,” and why have they left no return address?

To the chagrin of his wife and friends, who have to hear him read the diary out loud, Siri embarks on an investigation by examining the text. Though the journal was apparently written by a kamikaze pilot, it is surprisingly dull. Twenty pages in, no one has died, and the pilot never mentions any combat at all. Despite these shortcomings, Siri begins to obsess over the diary’s abrupt ending . . . and the riddle of why it found its way into his hands. Did the kamikaze pilot ever manage to get off the ground? To find out, he and Madame Daeng will have to hitch a ride south and uncover some of the darkest secrets of the Second World War.

Colin Cotterill is always at his best when writing his Dr. Siri novels and describing life in Laos under the early years of communist rule. While poking fun at the inept bureaucracies of Laos, Vietnam, China, and the USSR, Colin also recognizes the enduring spirit of the Lao people. Through over a century of colonial rule, the Laotian people appear to have overcome their oppressors using the simple tactic of ignoring them and just getting on with life. The author blends humor and compassion to recognize this in every book of this series. Another remarkable point: I am absolutely not a fan of fantasy or the occult and avoid books that contain even a little of either. But somehow I have become a fan of a senior citizen who coexists with the spirit of a 1500 year old shaman. Go figure. Another feature that I like: Colin gives us the history of Dr. Siri and his colleagues, who fought the French, the Japanese, the French again, the Americans, and then resisted takeover by Vietnam, China, and the USSR for a hellaciously-long time. When they achieved victory in 1975, many of the high-ranking communists moved into the American suburb of the Laotian capital and occupied the air-conditioned homes w/pools that the US State Department and CIA had built for their people and essentially retired in place. And why not? Those folks had been living in caves and fighting for over forty years. They deserved a break. I served in Vietnam in 1970-71 and saw the senseless destruction of that war, which was mirrored by America's undeclared war in Laos. I admire the people of both countries for winning their independence and for the progress they have made in developing their economies. I also admire Colin for his efforts to help educate the children of the mountain tribes of Laos and Thailand - he even roped me into helping out. I wish Dr. Siri and Madame Daeng could go on forever, righting wrongs and reminding us of the hubris all governments sometimes fall prey to.

The Delightful Life of a Suicide Pilot is being billed as "the last Dr. Siri Mystery." If you aren't familiar with the series that may not mean much to you—but, believe me, the last Dr. Siri is a big deal. Dr. Siri is the retired coroner for Laos, a true believer in socialism, who sees post-war events in his country with a perspective both jaded and hopeful. He also unwillingly travels between our world and the spirit realm,using enigmatic advice from his spiritual guide, a no-longer-living cross-dressing writer of bad verse. All the key characters in this series have similarly unexpected back stories—and all of them have the kind of decency and creativity that leave readers rooting for them.

This series can be read in or out of sequence, but once you start, you'll want to keep going. And you'll be glad there are 15 Dr.Siri mysteries, but sad that apparently there sill be no more.

I received a free electronic review copy of this book from the publisher via NetGalley. The opinions are my own.