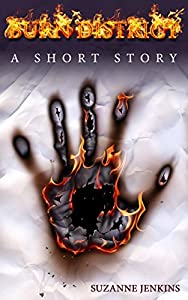 Laura and Mike Davis and their four children build an idyllic life with friends and family nearby in the beautiful Brandywine River Valley. Dreams and goals come to an abrupt end soon after Hurricane Sandy hits the east coast. Discovered in wood soaked by seawater, a virus thought to have the potential to decimate the population becomes the excuse to relocate thousands of citizens from beach towns. Fire is the only known way to eradicate the virus.

Rumors spread that napalm is used to burn without evacuating the people. A neighbor warns Laura and Mike that their town is next as the destruction moves inland. Is it a drastic way to halt the spread of disease, or is there another catalyst?

The premise of Burn District, #0.5 in the Burn District series, is that a saltwater-soaked piece of driftwood that floats ashore after Hurricane Sandy carries a deadly virus that could potentially wipe out any and all victims who become infected.

MCs are the Davis family - led by parents Laura and Mike, living less than 2 hours ahead of the latest town to fall prey to this Apocalyptic destroyer. The eldest of their four offspring has Down's Syndrome and needs extra care and attention, which may slow down their covert exit from Brandywine.

Negative influence is the Government, who are not only trying to control the virus' wildfire-like spread by allegedly spraying napalm on the victims but also wire-tapping everyone's home to discover who is infected and who is warning others to flee ahead of the end of the world as they know it - strictly illegal, but supposedly for the safety of the masses, who might panic and make things exponentially worse for their neighbors and friends.
Having been secretly so warned, the family heads southwest towards what they hope will be a safe haven. However they've had little or no time to prepare a survivalist kit of supplies and now Mike's created an extra problem by involving and including their neighbor Kelly.

Can the group make it to safety in Yuma? Why did Mike risk everything to bring Kelly on board?

Is there another hidden reason he wanted to save her in particular?
Are Laura (and Mike's Dad Randy) right to be suspicious that they may be nursing a temptress/ viper in their bosom? Will they be proved right or wrong?

Will the Government find out where they've gone and take retribution on the band of survivors?

Burn District will set your heart aflame in more ways that one - try it today -it's a 5-star winner!

An exciting prequel to get you interested in the Burn District Series. Once I started reading these 22 pages, I couldn't stop. Definitely look forward to reading the first book in this series. A deadly virus, the government destroying towns even with uninflected people still in their homes. A family fleeing to possible safety. Can they survive?