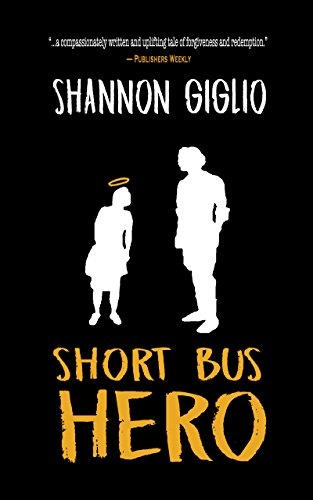 "Ally Forman, a young woman with Down syndrome and a burnt-out guardian angel, wins the lottery in this unusual work from horror scribe Giglio (Revival House). Twenty-four-year-old grocery bagger Ally is obsessed with pro wrestling, so when she finds out she’s won $314 million she vows to bring her favorite wrestler, the recently booted Stryker Nash, back into the ring. Determined to use her riches to finally make her own decisions, Ally—with the help of a few whispered words from her cynical spirit guide—fights for independence from a family that’s just as determined to convince her she can’t. And as the choices Ally makes take hold, she learns that being normal isn’t exactly what she thought it would be. In less sensitive hands, Ally’s story could have devolved into something unsatisfying and distasteful. But it never veers in that direction. Instead, what Giglio has presented is a compassionately written and uplifting tale of forgiveness and redemption." — BookLife/Publishers Weekly

“If you were the big Lottery winner, what would you do first? Why, resurrect the career of your favorite professional wrestler, of course. Touching, violent, hilarious, tragic and surreal—Short Bus Hero is an inspiring and emotional story.” — Richard Thomas, author of DISINTEGRATION, co-editor of BURNT TONGUES

"SHORT BUS HERO tackles a topic many readers may be unfamiliar and uncomfortable with, but does so with grace and humor and unerring skill. I'm being totally serious when I say this book might just be the TO KILL A MOCKINGBIRD for the twenty-first century. It's just that good." — Allan Leverone, bestselling author of FINAL VECTOR and MR. MIDNIGHT

Typically, when I review a book, I start out with a quick summary of the plot.

I'm not going to do that with SHORT BUS HERO. For one thing it, it would be hard to summarize succinctly a novel that combines Down Syndrome, professional wrestling, a three hundred million dollar winning lottery ticket, hoarding, death, angels, treachery, betrayal, and redemption.

Confused yet? I sure was when I started reading. My typical fare is genre fiction, horror and thrillers, and it immediately became clear that this was something different; I just couldn't quite figure out what. Inside of ten minutes, though, I was hooked.

If you want to learn more, you'll have to read the book, but believe me when I say doing so will be a worthwhile investment of your time. Shannon Giglio is proof of my theory that some of the best writers working today are people with whom you may not be familiar. In the space of a few short paragraphs she can take you from laughing out loud to tears rolling down your cheeks, and while you may have a general idea where the book is headed by the time you're halfway through, you will want to experience every second of the ride.

SHORT BUS HERO tackles a topic many readers may be unfamiliar and uncomfortable with, but does so with grace and humor and unerring skill. I'm being totally serious when I say this book might just be the TO KILL A MOCKINGBIRD for the twenty-first century. It's just that good.

Short Bus Hero by Shannon Giglio is a must read. Once you open the book it will grab you and hold you on the edge of your seat. Then those pages will turn and turn and turn some more until the end of the book. Where else can you read a book about Ally who has Down's syndrome. She wins the lottery of over 3 million dollars, her mother is a hoarder, her co-worker is a bully, there's The Cool People, and a washed up pro wrestler. Lastly you'll read about the guardian angel as she puts Clarence to shame. Make sure you have your tissues ..... you'll smile, you'll cheer, and you may even cry. This is one fantastic read. I just loved it. This would make a great gift or an addition to your bookshelf. I gave it 5 stars but it really needs 10+. I highly recommend this book to everyone. I look for more by Shannon Giglio.